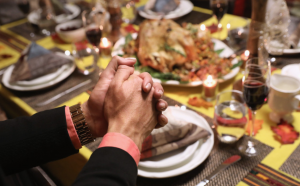 Health experts worry that increased travel and mingling over Thanksgiving and into the December holidays could exacerbate an already dangerous situation as COVID-19 cases and hospitalizations are rising across Texas.

“Cancel gatherings, large and small, unless you’re with your household,” Harris County Judge Lina Hidalgo said Tuesday. “We’re in a war against this virus. This is not the time to lament that we didn’t get a gathering this time around.”

Eight months into the pandemic, COVID-19 cases and hospitalizations are rapidly rising again in Texas and across the country. Experts say the latest surge in cases is linked to pandemic fatigue. In just eight days, the U.S. recorded 1 million new coronavirus cases, bringing the nation’s total to over 11 million. Texas exceeded a million cases Friday, according to state data.

Health experts worry that increased travel and mingling over Thanksgiving and into the December holidays could exacerbate an already dangerous situation.

“The worst thing I could think of is to take people from all over the country, put them in planes and mix them up,” said Dr. James McDeavitt, dean of clinical affairs at the Baylor College of Medicine. “That’s almost like you designed something to spread the virus aggressively.”

Already, airlines are reporting that travel is up for the holidays.

United Airlines is expecting the Thanksgiving holiday to be the busiest time since the pandemic began in March, according to a news release. The airline added over 1,400 domestic flights to accommodate the demand during the week of Thanksgiving.

Anaiya Davis said when her family gathers this Thanksgiving, there will be temperature checks at the door. Everyone attending is being asked to quarantine before the celebration. When Davis heads from her home in Austin to the Fort Worth area, she’s expecting to see about 15 people in her family. Usually there are about 50 there. Davis said two family members died this year who were immunocompromised, which has put the rest of the family on high alert.

“When we lost my grandpa, it kind of made us more conscious and very afraid of the virus in general,” Davis said. “Then when we lost my cousin, we jumped back into being more afraid because we were like, we’ve already lost two super important people in our family. We don’t want to run the risk of losing anybody else.”

The U.S. Centers for Disease Control and Prevention says small household gatherings are an “important contributor” to the rise in COVID-19 cases. The CDC advised that holidays be celebrated among the members in a household and noted that college students who live away are not considered household members.

Kate Feuille said her family is planning a small, outdoor Thanksgiving, but the situation where she lives, in El Paso, is worrisome. Cases in the area have surged and overwhelmed hospitals.

Still, she’s hoping the weather is nice so the family can have a physically distanced celebration outdoors. Feuille said her family is still working out how to get her son home from college safely. This year, instead of worrying about throwing a more grand Thanksgiving, she’s planning something more scaled down.

“The idea of making this big meal to come together as a family doesn’t seem that special right now,” Feuille said.

Isolating completely for the holidays isn’t the only option, health experts say.

“We need to celebrate after everything everyone has been through for the past year,” McDeavitt said. “If we could just get enough people paying attention to the holidays and being careful, then my hope is we can keep the holidays from becoming a major super-spreader event.”

McDeavitt said this holiday season, people should consider meeting virtually, celebrating only with those in their households, having carefully planned events with masks and distancing, or gathering only with those in their “bubble.” In the holiday bubble, as he described it, everyone involved would need to agree to follow strict health precautions, self-quarantine if possible, get tested for the virus and avoid contact with people outside of the bubble.

“Once you’re in your bubble, everybody comes in, everybody stays, nobody leaves and you don’t have neighbors over for drinks,” McDeavitt said.

Being away from family and friends during the holidays can have mental health consequences.

“If you want to be totally safe, you would just hole up in your house and never see another human being,” said Catherine Troisi, an infectious disease epidemiologist at UTHealth School of Public Health in Houston. “Well, that’s probably not even possible, but also not real good for your mental health.”

Even in normal times, the holiday season is “probably one of the most difficult times of the year for people” said Austin-based psychotherapist Grace Dowd.

“I think people are starting to really feel the psychological implications of COVID and some of that loneliness and isolation that’s being brought out,” Dowd said.

Dowd said while it can be the season of joy, people can also feel lonely and be reminded of family or friends who aren’t around. If someone is looking for community, they might not be able to visit family, but they could meet virtually or visit friends in their area while following precautions, Dowd said.

“I think we’re going to have to get a lot more creative this year around what the holidays look like, and I think coming to terms with [how] they may not look like how they looked in the past and mentally preparing for that,” Dowd said.