The announcement ends months of speculation. 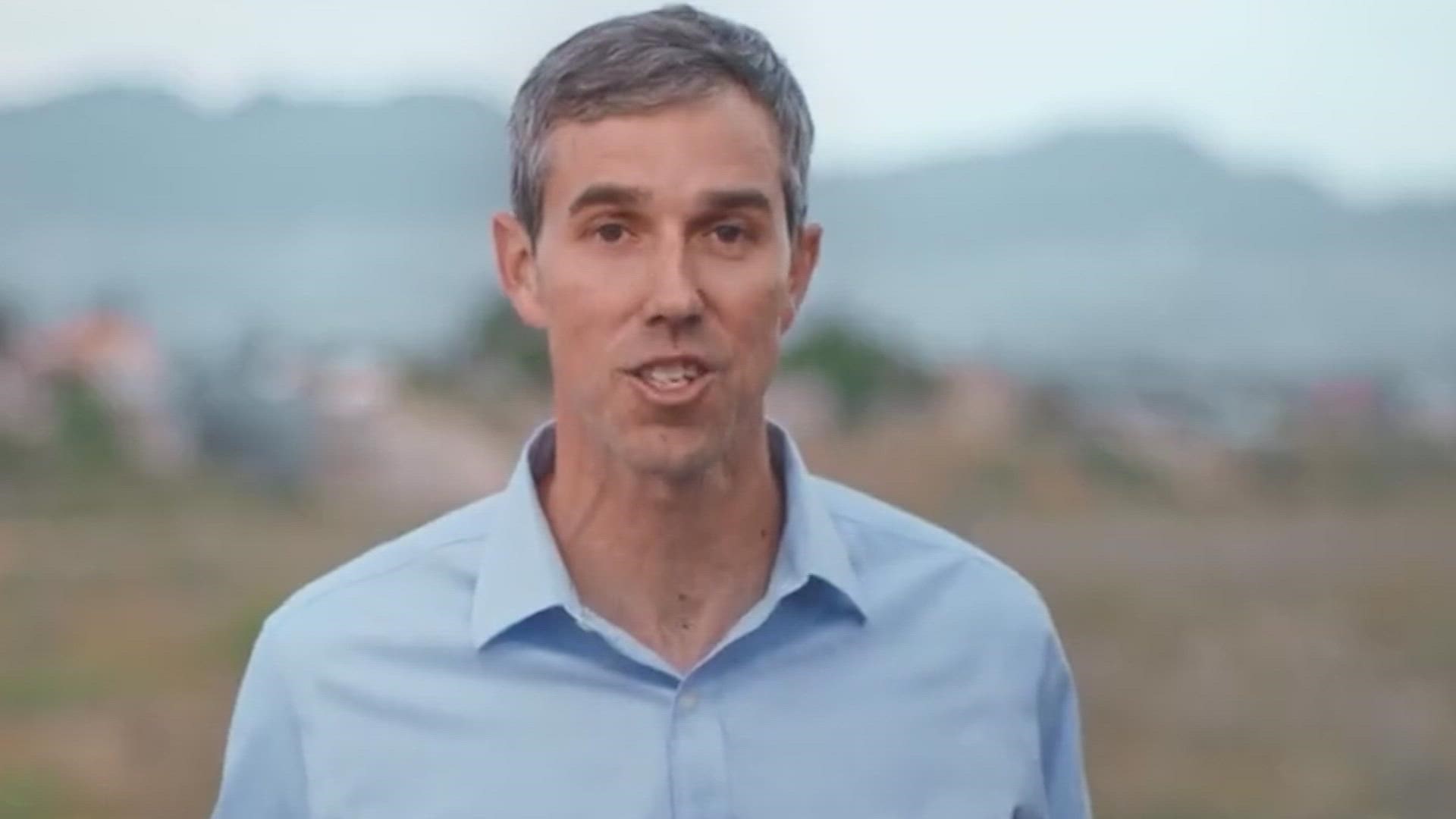 Democrat Beto O’Rourke is running for governor of Texas, pursuing a blue breakthrough in America’s biggest red state after his star-making U.S. Senate campaign in 2018 put him closer than anyone else in decades.

O’Rourke’s announcement Monday kicks off a third run for office in as many election cycles. He burst into the 2020 Democratic presidential primary as a party phenomenon but dropped out just eight months later as money and fanfare dried up.

“It’s not going to be easy. But it is possible,” O’Rourke said in an interview with The Associated Press ahead of his announcement. “I do believe, very strongly, from listening to people in this state that they’re very unhappy with the direction that (Gov.) Greg Abbott has taken Texas.”

O’Rourke’s return sets up one of 2022’s highest-profile — and potentially most expensive — races for governor. Abbott, a Republican, is seeking a third term and has put Texas on the vanguard of hard-right policymaking in state capitals and emerged as a national figure. A challenge from O’Rourke, a media-savvy former congressman with a record of generating attention and cash, could tempt Democrats nationwide to pour millions of dollars into trying — again — to flip Texas.

In a video announcing his campaign Monday morning, O’Rourke focuses heavily on the grid failure, saying Texans were “abandoned by those who were elected to serve and look out for them.” O’Rourke said in the interview that Abbott “has stopped listening to and trusting the people of Texas.”

Still, O’Rourke is coming back an underdog. Although the state’s growing population of Latino, young and college-educated voters is good for Democrats, the party’s spending blitz in the 2020 presidential election left them with nothing.

The outlook for Democrats nationwide is even worse heading into next year’s midterm elections. Texas has not elected a Democratic governor since Ann Richards in 1990. And freshly gerrymandered political maps, signed into law by Abbott in October, bolster Republicans’ standing in booming suburban districts that have been drifting away from the party. That could mean fewer competitive races and lower turnout.

O’Rourke, 49, will have to win over not only hundreds of thousands of new voters but some of his old ones. When O’Rourke lost to Republican Sen. Ted Cruz by just 2.5 percentage points, Abbott won reelection by double digits that same year, reflecting a large number of Texans who voted for O’Rourke and for the GOP governor.

That crossover appeal was a hallmark of a Senate campaign propelled by energetic rallies, ideological blurriness, and unscripted live streams on social media. But as a presidential candidate, O’Rourke molded himself into a liberal champion who called for slashing immigration enforcement and mandatory gun buybacks.

In the interview, O’Rourke signaled he’ll try to reclaim the middle in his bid for governor. He blasted Abbott for a “very extremist, divisive” agenda that caters to the hard right.

Asked about gun control, he said he does not believe Texans want to see their families “shot up with weapons that were designed for war.” But he pivoted quickly to slamming Abbott abolishing background checks and training for concealed handgun permits, gun regulations that once had bipartisan support.

O’Rourke argued that the broad coalition of voters that powered his near-upset in 2018, which included Republican moderates, could be formed again.

“What I’m going to be focused on is listening to and bringing people together to do the big work before us,” he said. “And obviously that first big job is winning this election. But the voters and the votes are there.”

O’Rourke officially announced his candidacy in a two-minute video, in which he directly speaks to the camera and criticizes a GOP agenda that he says ignores things voters “actually agree on,” such as expanding Medicare and legalizing marijuana. “Those in positions of public trust have stopped listening to, serving, and paying attention to the people of Texas,” he said.

O’Rourke isn’t the only one in the race out to regain his footing in Texas.

For most of his six years in office, Abbott has had an aura of political invincibility. But his job approval rating has slipped during the coronavirus pandemic, which has killed more than 70,000 Texans, as well as a deadly winter blackout that darkened the nation’s energy capital and a legislative session that passed new barriers to voting and effectively banned most abortions in the state. Abbott also aggressively bucked the Biden administration’s pandemic policies, angering some of Texas’ largest schools and employers by banning mask and vaccine mandates.

Despite the conservative policy victories, Abbott faces pressure from the right flank of his party. Two conservative firebrands, including former Florida congressman Allen West, have launched primary challenges. Former President Donald Trump has endorsed Abbott but also has pressured him to audit the state’s entire 2020 election results over false claims of fraud, even though he won Texas. Abbott has refused.

Still, the Texas governor enters the race with a $55 million campaign war chest, the biggest of any incumbent governor in the country.

Trump’s was a narrow victory by Texas standards, 5.5 percentage points, a closer finish than his win in the storied battleground of Ohio. For deflated Democrats, it was proof that Texas is turning — albeit painfully slowly.

The party struggled for months to identify a challenger to Abbott, resulting in a “Beto or bust” plan reflecting the enduring skepticism even in their own ranks. No other Democrats have entered the race or have flirted with challenging Abbott.

Actor Matthew McConaughey, who lives in Austin, has teased a run for governor for months but has not said whether he would make one as a Republican or a Democrat.

Any shot for O’Rourke will require at least a touch of the magic of his Senate run against Cruz, when the onetime punk rocker from El Paso won over suburban moderates and road-tripped to the reddest of Texas’ 254 counties. He said he will again show up in tough places for Democrats, who for decades have failed to translate torrid growth and demographic shifts in Texas to a path out of the political wilderness.

Supercharged Texas has boomed to nearly 30 million people over the last decade and has five of the nation’s 12 largest cities. Texas’ explosive growth is driven almost entirely by new Latino and Black residents, traditionally Democratic voters, and Democrats say those demographic shifts combined with fatigue over crises and GOP culture wars could drive Abbott out of office.

Republicans have mocked O’Rourke as overhyped since he dropped out of the presidential race. One of O’Rourke’s first projects after ending his White House bid — leading a charge to flip the Texas House — failed to pick up a single additional seat for Democrats.

Still, it began a reboot for O’Rourke, who teased his run for president with a cover story in Vanity Fair and soul-searching blog posts but has spent much of the past 18 months as a party activist and organizer. He knocked on doors along the Texas-Mexico border to sign up new voters and led a nearly 30-mile (48-kilometer) march to the state Capitol.

He has also proved that he can still tap into a large network of donors, who fueled his record $80 million in fundraising during his Senate campaign.

“From Beto O’Rourke’s reckless calls to defund the police to his dangerous support of the Biden Administration’s pro-open border policies, which have resulted in thousands of fentanyl deaths, Beto O’Rourke has demonstrated he has more in common with President Biden than he does with Texans. Governor Abbott proudly supports the men and women of law enforcement, has deployed Texas National Guard and Texas Department of Public Safety personnel and resources to secure the border, and has created a business climate that has made Texas the economic engine of America. The last thing Texans need is President Biden’s radical liberal agenda coming to Texas under the guise of Beto O’Rourke. The contrast for the direction of Texas couldn’t be clearer.”