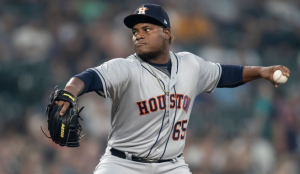 Roger Maris’s 61-year-old American League home run record isn’t the only record that could be matched today on the diamond. In Baltimore, Houston Astros pitcher Framber Valdez will look to toss a 26th consecutive quality start as he goes up against the Orioles.

The Orioles will be hoping to continue their stellar pitching in this series, as they blanked the Astros in the first two games. Last night’s 6-0 win saw them pull within three games of the Seattle Mariners for the final AL wild-card spot, thanks to a little help from the Kansas City Royals, who beat the Mariners 5-1 at Kauffman Stadium.

There are only 12 games left to catch and pass Seattle (or Toronto or Tampa Bay), but two shutout wins over the AL’s best team, along with Seattle’s recent struggles, should have the O’s confident about their chances to pull it off, even with a very tough schedule to navigate.

Game odds are via FanDuel. Odds from our other recommended legal sports betting sites may also appear in this article.

What the Orioles have done in must-win situations in the last two games is nothing short of incredible.

On Thursday, Kyle Bradish outdueled likely AL Cy Young winner Justin Verlander, allowing just two hits (and no walks) and striking out ten in 8.2 shutout innings before giving way to Felix Bautista for the final out.

Last night, Dean Kremer picked up where Bradish left off and went one better, allowing four hits and two walks and striking out six as he went the distance in a 6-0 win.

Prior to this series, Houston had gone 18-4 since losing the first two of their home series against Baltimore last month. This season, the Astros have been shut out nine times, with three coming at the hands of the Orioles.

Will they keep it up today? Tyler Wells, a regular member of their rotation, was originally scheduled to start this game, but was placed on the 15-day IL with right shoulder inflammation and will not pitch again in 2022.

Baumann has started just once, allowing three runs and eight hits in five innings in a home loss to the Blue Jays on September 5, so it remains to be seen how long he can go. But with an extremely fresh bullpen, Baltimore is in a strong position for tonight and tomorrow.

The Orioles have done a great job of getting out in front and then tacking on valuable insurance runs in the first two games, and they have seen five members of Houston’s bullpen in their two wins.

Home and Away Splits for Framber Valdez

But can Baltimore’s bats get to Valdez? His numbers are far superior on the road than at home, so they should get the best version of him tonight.

Of the five times that Valdez has pitched eight or more innings this season, all five have come on the road, and seven of his 12 7+ inning starts have been on the road.

It is rather hard not to back the Orioles based on their performance Thursday night and last night and because their bullpen is so fresh even if Baumann isn’t asked to go deep like Bradish and Kreme did.

But it’s even harder to bet against Valdez and the Astros, who have lost three or more straight games only three times this season, only once in the same series (at Oakland in late July).

Houston is 19-9 in Valdez’s starts this season, including a 7-1 mark in his last eight road starts and an 8-2 mark in ten overall starts since the All-Star break.

Of those 19 wins, 16 have come by 2+ runs, including nine of 11 road wins and seven of eight overall wins since the All-Star break. So, if you are interested in backing the Astros, there is good value with the RL here.