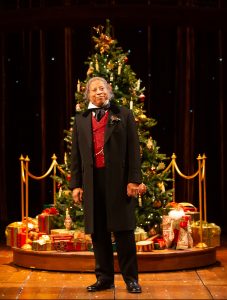 “I’m so excited to announce our 76th Season. It is our first full season, including Summer Chills, since we closed for COVID-19 in 2020. It really feels like we are BACK!” says Artistic Director Rob Melrose. “This season is bold and adventurous, featuring six world premieres, including new plays by Isaac Gómez, Monet Hurst-Mendoza, Ken Ludwig, and a new musical created by Molly Beach Murphy, Jeanna Philips, and Annie Tippe. The classics are also solidly represented with new adaptations of A Christmas Carol, the hilarious commedia dell’arte classic The Servant of Two Masters, Nobel-Prize winning author Derek Walcott’s adaptation of Homer’s epic The Odyssey, and the American classic Edward Albee’s Seascape, which won the Pulitzer Prize in 1975.”

“Edward Albee was in residence at the Alley for over a decade. It has been twenty years since we have produced one of his plays,” Melrose continues. “The Alley has never done Seascape, arguably his second most famous play after Who’s Afraid of Virginia Woolf? I’m excited for the Alley to celebrate the important part it had in this great American playwright’s career. There are also lots of thrills and chills between our summer production of Clue and Sherlock Holmes and the Case of the Jersey Lily later in the spring.”

The Alley Theatre’s 76th Season will launch with the return of Summer Chills with the madcap comedy Clue, with screenplay by Jonathan Lynn, written by Sandy Rustin with additional material by Hunter Foster and Eric Price. Clue is based on the Paramount Pictures Motion Picture and the Hasbro board game, this production runs July 22 – August 28, 2022 in the Hubbard Theatre and is directed by Alley’s Associate Producer & Casting Director Brandon Weinbrenner.

Next, is the world premiere comedy Lend Me A Soprano by Tony Award®-winner Ken Ludwig (The Three Musketeers, Murder on the Orient Express), which runs September 16 – October 9, 2022 in the Hubbard Theatre. This revisal of Ludwig’s Lend Me a Tenor is directed by Eleanor Holdridge.

Based on the story by Homer, The Odyssey by Nobel Prize-winner Derek Walcott is directed by Christopher Windom (Choosing Love). The classic adventure runs March 24 – April 23, 2023 in the Neuhaus Theatre.

The comedy-mystery Sherlock Holmes and the Case of the Jersey Lily by Katie Forgette runs April 14 – May 7, 2023 in the Hubbard Theatre. Associate Producer & Casting Director Brandon Weinbrenner directs.

Next, the world premiere of Torera by Monet Hurst-Mendoza and directed by Tatiana Pandiani runs May 12 – June 11, 2023, in the Neuhaus Theatre. The play will be developed in the upcoming 2022 Alley All New Festival.

Closing out the season is Artistic Director Rob Melrose’s translation and adaptation of The Servant of Two Masters based on Carlo Goldoni’s original text. This world premiere adaptation is directed by Melrose and runs June 9 – July 2, 2023 in the Hubbard Theatre.

Alley Transported and the production of A Midsummer Night’s Dream will tour January 23 – February 5, 2023 throughout the community. Alley Transported is an “up-close and personal” experience of live professional theatre designed to reach all generations of Houstonians in every one of our neighborhoods. Professional productions of Shakespeare and community-relevant plays will take place in schools, recreation centers, libraries, and other community venues. Alley Transported gives the community an intimate, heartfelt, visceral, and transporting experience of live performance and fosters a shared sense of community.

The Alley is solidifying the title for the second Hubbard production that runs January 20 – February, 12, 2023. Once final, the Theatre will share the title, playwright, and director.

Madcap Comedy
CLUE
Based on the screenplay by Jonathan Lynn
Written by Sandy Rustin
Additional Material by Hunter Foster and Eric Price
Based on the Paramount Pictures Motion Picture
Based on the Hasbro board game CLUE
Original Music by Michael Holland
Directed by Brandon Weinbrenner
July 22 – August 28, 2022 in the Hubbard Theatre
By special arrangement with The Araca Group, Work Light Productions, and Michael Barra/Lively McCabe Entertainment

It’s a dark and stormy night, and you’ve been invited to a dinner party. Murder and blackmail are on the menu when six guests assemble at Boddy Manor for a night they’ll never forget… if they make it out alive. Was it Mrs. Peacock in the study with the knife? Or Colonel Mustard in the library with the wrench? Based on the cult movie and the classic board game, Clue is the ultimate whodunit that will leave you dying of laughter and keep you guessing until the final twist.

Ken Ludwig (The Three Musketeers, Agatha Christie’s Murder on the Orient Express), America’s preeminent comedic playwright, debuts a “revisal” of his classic hit Lend Me a Tenor with women in the leading roles, Lend Me A Soprano is set in 1934 as Mrs. Lucille Wiley, General Manager of the Cleveland Grand Opera Company, is ready to welcome world-famous soprano Elena Firenzi for her one-night only starring role in Carmen. Alas, Elena arrives late, ill and in need of a nap so, following orders, Wylie’s assistant and aspiring opera singer Jo slips sleeping pills into Elena’s martini. When Elena doesn’t wake up, it’s up to Jo to save the day. Don’t miss the laughs in Ludwig’s hilarious farce that kicks off the season!

From major American playwright and Alley favorite Edward Albee comes a Pulitzer Prize-winning play that tackles two of the playwright’s favorite subjects: marriage and what it means to be human. With his signature wit, Albee introduces a middle-aged couple, Nancy and Charlie, taking a stroll on a deserted beach. Facing retirement, they argue with comfortable familiarity about how to spend the rest of their lives. When a second couple, Sea Creatures Sarah and Leslie, arrives from the depths of the ocean, a pitched encounter, both surreal and profound, ensues. It seems that Sarah and Leslie are also at a turning point in their lives and they are also like no other couple Nancy and Charlie have ever met. A tender and often laugh-out-loud love story, told by way of an unusual marriage counseling session.

Inspired by the original novella, Melrose captures Dickens’ witty wording and evocative style to surprise audiences with parts of the familiar story they didn’t know were there! With rich Victorian costumes, exciting magical elements created by acclaimed magician Jim Steinmeyer, and beautifully sung holiday carols, A Christmas Carol tells the beloved story of Scrooge and his miraculous transformation. This new production of a holiday tradition is the perfect way for families to recapture the nostalgia of Christmases past and to create memories for many Christmases to come.

Meet Margot, a 30-something Tejana who works at a beloved whata-sized Texas burger joint. The Christmas Eve overnight shift is her personal tradition — even if that means spending the holiday dealing with grumpy drive-thru customers and an equally grumpy robotic Santa. But when her dead best friend Jackie Marley drops by to warn her of impending late-night visits by spirits, Margot has no choice but to roll with the punches and confront the very Scrooge she’s become. It’s a Christmas Eve like none other in this brand-new holiday show filled with humor and heart set right here in Htown by Texan playwright Isaac Gómez.

You wouldn’t look twice at Peggy Jo. She’s a good daughter, always tips, plays by the rules – but when she dons a fake beard, sunglasses, and ten-gallon hat, she becomes “Cowboy Bob”- the slickest bank robber Texas has ever known. And she may just be the life-affirming inspiration one waitress in a Dallas Chili’s badly needs to buck routine and take control of her own life. Equal parts Riot Grrrl rage and Texas twang, this world-premiere musical loosely based on actual events – and co-authored by Galveston’s own Molly Beach Murphy – invites audiences to join the heist, take life by the reins, and let it ride.

With rich Caribbean tones of his island home, Derek Walcott (winner of the Nobel Prize for Literature) adapts the ancient story of Odysseus, the soldier-king who spends 10 adventurous years making his way home from the Trojan War. Interspersing the story with a commentary by the blind singer Billy Blue adds richness and a musical lilt to the classic tale. While Odysseus’ loving wife Penelope stays chaste in Ithaca, fending off suitors ready to take the throne, Odysseus and his crew face shipwrecks, wrathful gods, sirens, monsters, incarceration, mermaids, a side trip to hell, and absolutely foul weather.

A Comedy-Mystery
SHERLOCK HOLMES AND THE CASE OF THE JERSEY LILY
By Katie Forgette
Directed by Brandon Weinbrenner
April 14 – May 7, 2023 in the Hubbard Theatre

The wit of Oscar Wilde meets the cunning of Sir Arthur Conan Doyle. In this comic twist on a classic sleuthing caper, Wilde’s muse, actress Lillie Langtry (a.k.a the Jersey Lily) presents Holmes with what seems like an open and shut case. But with his superior powers of deductive reasoning, Sherlock wastes no time in exposing a much more sinister conspiracy. Meanwhile, Oscar Wilde is in the throes of writing his acclaimed The Importance of Being Earnest and Holmes might inspire some of the play. In a fast-paced ride full of surprises and disguises, Holmes and Watson must do whatever it takes to help their friends…while facing their greatest foe.

Bullfighting in Yucatán, Mexico is a world nearly exclusive to men—yet for Elena Ramírez, it is her life’s ambition. With the help of her best friend, a matador’s son, Elena begins secretly training to compete with the greatest. But when she discovers that her seemingly inherent talent can beat even the most accomplished toreros, this young woman must choose between accepting society’s limits or breaking boundaries. A world premiere play written by a stunning new voice in the American theatre, Torera tells a poignant story about becoming your truest self by proudly stepping into the ring. The play will be developed in the 2022 Alley All New Festival.

From the original play in Italian by Carlo Goldoni

Identities are mistaken, engagements are broken, and lovers are reunited in this world premiere adaptation of Carlo Goldoni’s commedia dell’arte masterpiece. Set in Venice, mayhem erupts when the wily—and chronically hungry—servant Truffaldino hatches a zany scheme to double his wages (and his meals) by serving two masters at once. Directed by Rob Melrose, this physical comedy classic will have you laughing at and loving our hapless hero.

Taking place on a 15 by 15 foot playing area with many of the Alley Resident Actors, A Midsummer Night’s Dream is a feast for the eyes, heart, and funny bone. Viewers are led from an elegant but earthbound palace into a magical forest where some of the inhabitants may not be bound by anything at all. It’s a world where even the fools are enchanting. The audience is a part of the wacky action in this abridged version of Shakespeare’s text.

Full casting and creative teams for all productions will be announced at a later date.

ABOUT THE ALLEY THEATRE:

The Alley Theatre, one of America’s leading nonprofit theatres, is a nationally recognized performing arts company led by Artistic Director Rob Melrose and Managing Director Dean R. Gladden. The Alley is committed to developing and producing theatre that is as diverse as the Houston community. The Theatre produces up to 16 plays and nearly 500 performances each season, ranging from the best current work and re-invigorated classic plays to new plays by contemporary writers. Home to a full-time resident company of actors, the Alley engages theatre artists of every discipline—actors, directors, designers, composers, playwrights—who work on individual productions throughout each season as visiting artists.

The Alley is comprised of two state-of-the-art theatres: the 774-seat Hubbard Theatre and the 296-seat Neuhaus Theatre. The Alley reaches over 200,000 people each year through its performance, education, and community engagement programs. Its audience enrichment programs include pre-show and post-performance talks, events, and workshops for audience members of all ages.