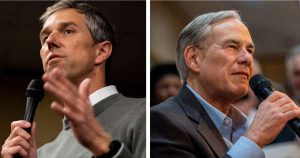 Gov. Greg Abbott won his Republican primary outright Tuesday, capping a year during which he faced vocal challengers from his right.

While largely expected, the decisive victory allows Abbott to fully focus on the general election, where he will face Democrat Beto O’Rourke.

“Tonight Republicans sent a message they want to keep Texas the land of opportunity and prosperity for absolutely everybody, the prosperity that we have delivered over the past eight years,” Abbott said at his election-night rally in Corpus Christi.

With an estimated 79% of the vote in, Abbott had garnered 68%, according to unofficial results. His closest competitor was former Texas GOP Chair Allen West with 12%. West earned 17% of the vote in Denton County, compared to Abbott’s 62%.

O’Rourke cruised to victory in his primary, with over 90% of the vote from Democrats. He celebrated the win with a rally in Fort Worth, the seat of the traditionally red county, Tarrant, that he flipped in his 2018 U.S. Senate campaign.

Abbott’s primary had been much more competitive than O’Rourke’s, even if the election night carried little suspense. The third-place finisher, Don Huffines, conceded within an hour after polls closed.

For months, Abbott’s primary opponents hounded him over his response to the coronavirus pandemic, criticizing his executive orders in its early stages — which included a statewide mask mandate and business shutdowns — and alleging he had not fought hard enough against local mandates. They also accused Abbott of not doing enough to secure the Texas-Mexico border.

Polling long gave Abbott a wide lead over his challengers, though the primary continued to attract attention because it seemed at times that Abbott was governing in response to the criticism from his right. For example, in October, Abbott issued a ban on all COVID-19 vaccine mandates, including by private businesses, even though his office had previously said they should be able to decide on their own.

Still, Abbott publicly ignored his primary opposition, and his campaign dismissed the idea that the governor was tacking right because of them.

Huffines in particular claimed credit for pushing Abbott to the right, a sentiment he repeated as he bowed out of the race.

“For over a year our campaign has driven the narrative in Texas and forced Greg Abbott to deliver real conservative victories,” Huffines said.

A former Dallas state senator who served one term before losing reelection in 2018, Huffines tapped his and his family’s fortunes to self-fund his campaign to the tune of seven figures. He also received heavy financial support from some of the state’s top hard-right donors, like Tim Dunn and Farris Wilks.

West, coming off a short tenure as Texas GOP chair that was fraught with questions about his political ambitions, was better known than Huffines and ran less of an explicitly anti-Abbott campaign. He still worked to position himself to the right of Abbott when it came to issues like pandemic management and border security.

The primary got a late jolt in December when, on the last day of the filing period, someone named Rick Perry threw his hat in the ring. It was not the former governor, but a man from Springtown who was working with a Huffines supporter.

It does not appear many voters were fooled, however. Perry was receiving about 3% of the vote early Tuesday night.

Abbott had tremendous advantages in his primary, including a war chest that at one point topped $65 million. And he put it to use, spending $15 million from Jan. 21 through Feb. 19, including on TV ads that pitched him as tough on the border. He barnstormed the state from early January onward, making 60 campaign stops across the state, including here in Denton County.

Abbott had the endorsement of former President Donald Trump, who backed him in June for reelection.