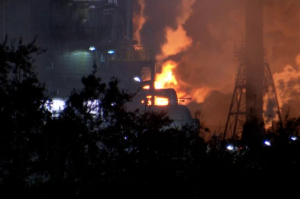 Initial reports indicated an explosion happened at the ExxonMobil oil refinery in Baytown, Texas, Harris County Sheriff Ed Gonzalez said in a tweet, and residents in the area reported a loud explosion.
A fire happened at the refinery around 2 a.m. ET, according to ExxonMobil, did not immediately confirm an explosion or say what led to the fire.
Four people were injured, the sheriff’s office said, three of whom were taken for treatment by helicopter and one by ambulance.
The fire happened in a unit that produces gasoline, and the plant’s emergency workers still were working before sunrise to extinguish the fire, ExxonMobil refinery manager Rohan Davis told reporters early Thursday.
The conditions of the four injured people were stable, said Davis, who said he could not comment on the extent of their injuries.
Enter your email to sign up for CNN’s “Meanwhile in China” Newsletter.
close dialog
The cause of the fire wasn’t immediately known and will be investigated, Davis said.
The company is coordinating with authorities and is monitoring air quality with regulators, Davis said.
“All of those results so far have shown no impact to the community from an air quality perspective,” Davis said.

The Baytown refinery, which began operations in 1920, has an average daily capacity to refine 561,000 barrels of oil, according to the US Energy Information Administration.
That makes it the fourth-largest US refinery, only 8% smaller than the largest, the Motiva Enterprises facility in Port Arthur, Texas, owned by Saudi Aramco. Baytown is one of only five US refineries with a capacity of more than 500,000 barrels a day.
The refinery incident Thursday could hamper output for months, weighing on gasoline supply at a time when US refining capacity has already been reduced, said Tom Kloza, a chief oil analyst for the Oil Price Information Service.
The incident shouldn’t immediately send gas prices higher. That’s mostly because the next six weeks — from right before Christmas to early February — is historically the period of lowest demand for gasoline nationwide. Wholesale gas prices were up only 2 cents a gallon to $2.19 in early trading Thursday.
“Fortunately we don’t need the gasoline (from Baytown) for the next six weeks,” Kloza said. But by spring, when demand starts to increase again, the lost output from Baytown will likely be felt at pumps nationwide.
ExxonMobil operates the refinery and several other facilities, including a chemical plant and a technology center, on about 3,400 acres in and around Baytown. It employs about 7,000 people in the Baytown area, the company says.
The refinery in Baytown is roughly a 25-mile drive east of downtown Houston.
Source: cnn
COVID-19 News
Politics
Community
Immigration
LoneStar