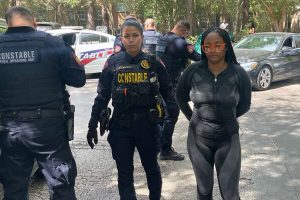 A Humble woman has been arrested for her alleged involvement in a $3,300,000 finance scheme conducted through her credit repair business, Harris County Precinct 4 officials said.

According to Constable Mark Herman, deputies conducted a raid at Rose Credit Repair in the 15300 block of John F. Kennedy Boulevard near Bush Intercontinental Airport in north Harris County over the weekend.

Court documents state the business’s owner, 29-year-old Roekeicha Lashay Brisby, was involved in the scheme which began around Nov. 2020 and lasted until March 2022.

Herman said she was arrested on Friday without incident.

Documents also state Brisby filed around 133 false reports that made it appear it came from Precinct 4 Constable’s Office about the loss or theft of credit cards while seeking to erase about $1,400,000 in client debt on behalf of 74 people.

After a lengthy investigation inside of the business, deputies found information indicating that Brisby’s business “would fix people’s credit through illegal means.”

Photos taken by investigators show a banner from Rose Credit Repair that claims to help customers “raise their credit score by 50-100 points,” and “use the Law to remove common errors” such as late payments, bankruptcies, and settlements.

The business also claimed that customers would see results “in 35 days or less.”

Brisby has been charged with felony Forgery of a Government instrument in this case. Her first court date was for Monday, July 11.

“One of these institutions actually came to us, and that’s how we got involved,” he said. “Once we started looking at the case reports, we noticed that the case numbers would not match our current system.”

Some of the employees Brisby had previously worked with are also expected to be charged, according to Herman.

Both the Harris County District Attorney’s Office and the FBI are working with Precinct 4 on the investigation.

Herman added that additional charges for Brisby may be forthcoming.

Authorities are asking anyone who has done business with the suspect to come forward and contact Pct. 4.

Back in 2019, Brisby was arrested and charged with injury to a child after authorities say she and her boyfriend placed her then 7-year-old son in a scalding hot shower after the child reportedly misbehaved at school.

Her boyfriend at the time, Mark Terrell, was accused of forcing the child to stand in a shower as he sprayed him with the hot water, resulting in burns on his head, face, neck, and chest.