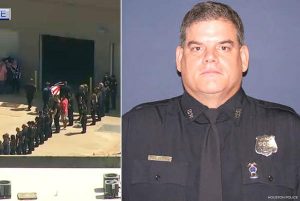 One officer is dead and another is injured after a shooting in northeast Harris County.

The incident happened around 7:30 a.m. at the Timber Ridge Apartments on Aeropark Drive near Crosswinds Drive, authorities said.

When they arrived, Finner said a woman believed to be in some sort of relationship with the suspect answered the door. At that point, Finner said the suspect immediately came out and opened fire on the officers.

Both Vance and Jeffrey were transported to Memorial Herman, one via Life Light and the other by ambulance. According to Houston Mayor Sylvester Turner, Jeffrey was killed in the shooting. Vance is in surgery and expected to recover, Turner said.

“Police officers never know what they’re going to face when they leave their homes,” Turner said. “During the course of their duty, (their work) is inherently dangerous … Pray for the Jeffrey family, and then pray for the full recovery for Sgt. Vance.”

The suspect who opened fire at the officers was also killed in the shooting. According to the suspect’s family members, the suspect was 31-year-old Deon Ledet.

Finner said the woman and a small child were in the apartment at the time of the shooting.

Witnesses described hearing gunfire minutes before 7:30 a.m. Monday. Many were parents taking their children to school.

Lynn Turner, who lives in a unit near the unit at which Ledet lived, said she was getting ready to leave for work this morning when she saw a woman, carrying a child, run. 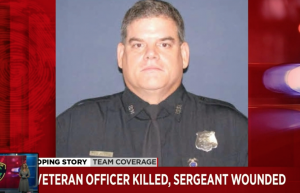 Turner was outside with her dog. She said after she saw the woman, all she could do was a duck.

When the smoke cleared. Two men were down: Senior Police Officer William “Bill” Jeffery and Deon Ledet, the suspect.

Turner said the shooting occurred as parents brought their children to school.

“It was overwhelming and it was too much.  It was a lot of kids out here,” Turner said.

Monica Scott said she was leaving to drive her child to school when she saw the officers arrive to serve a warrant for Ledet’s arrest.

“As I was leaving out, taking my son, I saw an officer outside. One was outside at their back door,” Scott said.