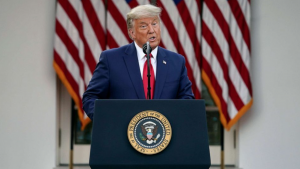 Outgoing U.S. President Donald Trump has finally broken his silence, admitting indirectly that he has lost the election to Joe Biden.

He spoke on Friday at the White House, his first speech since Biden was declared the winner last Saturday.

Trump came out to speak on the raging coronavirus in the country, where over one million infections were recorded in the first 10 days of November.

He last spoke on 4 November, though he has been tweeting and retweeting allegations of voting fraud.

He vowed not to impose a nationwide coronavirus lockdown, after one of Biden’s new advisers said earlier this week it may be the only option to tackle Covid.

But he then conceded that the decision may be out of his hands in the near future.

Biden is on course to take over from Trump in January, although Trump has not formally conceded defeat.

Trump made the remarks after repeatedly refusing to accept Joe Biden’s victory in the November 3 election, and making unfounded claims that the result was rigged.

Biden was named winner on Saturday, with several forecasters also calling Georgia for him on Friday.

Biden has 306 electoral votes to Trump’s 232, with the president’s promised lawsuits to challenge the result running into increasing difficulty in recent days.

Trump’s mention of lockdowns was his only reference to the presidential election, metro.co.uk reported.

He spent the majority of Friday’s press conference giving an update on Covid vaccine efforts on Friday, saying:

‘The past nine months my administration has initiated the single greatest mobilisation in US history, numbers like nobody has ever seen before.

‘No medical breakthrough has ever been achieved this quickly, this rapidly.

‘Operation Warp Speed is unequaled and unrivaled anywhere in the world.’

Trump, who referred to Covid as the ‘China virus’ went on to make excuses for the surge in cases across the US, which some scientists have said is a third wave.