The President of the United States will make a trip to the Rio Grande Valley.

It’s news that is shaking both sides of the political spectrum in the RGV.

Once it was announced that President Donald Trump will visit the RGV for a border wall dedication on Tuesday, the RGV’s political parties took to social media to voice their support or dismay at Trump’s decision to come to Texas’s most southern area.

Hidalgo County, where the president plans to spend the majority of his trip, featured the longest posts on the matter.

The Hidalgo County GOP noted that they had not been contacted by any administration on the matter and “have been praying for our Country and appreciate his leadership”.

The HCDP contests that there is no benefit to his visit to the area, nor to the rallies that his supporters will organize.

In the post, the HCDP worries about how much COVID-19 will spread due to this visit and asks “can there be any doubt that more viruses will be spread by this hoax-believing MAGA mob?”

Lastly, the HCDP hopes that local leaders can convince Trump to not visit the RGV.

The Cameron County Republican Party page announced that their organization would be hosting a welcoming party for the president and are allowing supporters to join.

The only other county political party to post was the Willacy County Republican Party, who first announced Trump’s visit on Saturday at 1 a.m. They offered no other input other than that initial info, however.

With Trump’s visit coming closer, more RGV officials are expected to lament their opinions on the event. 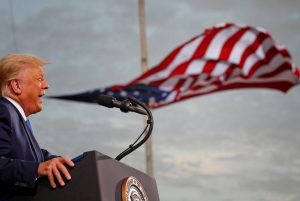