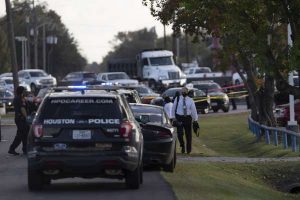 The Houston police officer shot and killed in north Houston has been identified as 47-year-old Sgt. Sean Rios, a 25-year-veteran of the Houston Police Department.

Rios was killed Monday afternoon in the 7900 block of the North Freeway after police say he engaged a suspect in a gun battle. After being shot, Rios ran into the Taj Inn & Suites motel looking for help and collapsed. He was declared dead at the scene.

Authorities and witnesses say the officer, who was wearing plain clothes, was shot multiple times.

“We are going to catch you,” Acevedo said. “Do yourself a favor and turn yourself in. The best thing you can do if you know this person, is turn themselves in.”

Acevedo added that Rios was headed to the airport for his 2 p.m. shift when he was involved in the shootout. Rios leaves behind four kids.

On Oct. 20, Houston Police Sgt. Harold Preston was shot and killed while responding to a domestic violence situation. The 41-year veteran of the department, who was preparing to retire this year, was laid to rest on Oct. 30.