QOM: Today is October 19th, Mon- day, and we are here with Harris County District Clerk, Ms. Marilyn Burgess. How are you today?

Marilyn Burgess: I’m doing great, how are you?

QOM: Just wanted to ask you a few questions regarding the jury survey that you’re putting together for the community. And I wanted to ask you, why are you launching this comprehensive survey for jury service?

Marilyn Burgess: Jury appearance rates in Harris County have been a problem, in the low 20-percent, for years. And when I came into office, I was committed to doing everything I could to increase that appearance rate. Not only do we need people to show up so that we have diverse juries, but it also costs the county a lot of money when our appearance rate is as low as 22%. And now with COVID-19 introduced to it all, it’s even worse. So we were running at about 22-23%. With COVID-19, it’s more about 12%, which you can understand. People are afraid of showing up. But I want to do something on a more permanent basis to increase the appearance rate and to increase diversity. Right now, our appearance rates were over-represented in the Caucasian community. We’re overrepresented in the Asian community. And we’re underrepresented in the African-American community and severely underrepresented in the His- panic community. The Hispanic community makes up about 43% of Harris County demographics and we have about 22% of our people who show up for jury duty who are Hispanic. It’s not as bad with the African-American community, but they are underrepresented as well. So we need to work on those minority communities to show them how important it is to show up for jury duty. It’s kind of like wearing a mask: you do that for others. Same with jury duty: you do that for others. You want to have a jury that’s representative of you, that looks like you. So you need to show up so that other people have that as well.

QOM: How are you going to conduct the survey and for how long?

Marilyn Burgess: We have engaged the services of an outside consulting firm, January Advisors. They will be conducting the survey that started onOctober12thandwillrunthrough November 1st. We’re trying to get 1,000 responses by phone, plus 1,000 responses with our online jury survey, which people can go online to complete that at www.jurysurveyhar- ris.com

QOM: So, you’ll conduct the survey from October to November?

QOM: What kind of precautions is the district taking during this pandemic to bring jurors back to the courts?

Marilyn Burgess: We have worked with the Harris County Public Health Department to make sure that we make our jury assembly just as safe as it can possibly be during the midst of the pandemic. And I truly believe that our jury assembly area is as safe as anywhere you can go outside your own home. We have implemented procedures where people that are coming onto the lot at NRG Arena are asked a series of questions to see if they have been exposed to COVID-19 or are running a temperature or have any symptoms. And then when they come into the building, they’re screened with a temperature check first, and then everybody has to wear a mask. In addition to that, we’ve got hand sanitizer spread throughout the facility. We went out to NRG Arena instead of doing it here downtown because it gave us the space that was necessary to ensure that we could socially distance ourselves throughout the entire jury experience. So we keep everybody six feet apart, the rows that they are sitting in have two empty seats between them, we do seat every other row. When they go into voir dire, they’re given a clear plastic face shield so people can see their facial expressions, but they’re still protect- ed. Again, we’re just doing everything we can. The area is sanitized after every panel comes and leaves. The NRG Arena staff is very good about frequent sanitation of the common areas throughout the day several times a day. Also the restrooms and the tables where people sit to eat and the screening stations. We provide a glove so that when you check-in at our kiosk, you’re using a hand with a disposable glove so that you’re not touching the keyboard that anyone else has touched. And then that glove is disposed of.

QOM: So, when people get there, they don’t need to take their masks or sanitizers? That is all provided by the county?

Marilyn Burgess: Well, we encourage you to bring your own mask, though we do have disposable masks that are provided if you don’t have one.

QOM: Which other agencies are partnering with the survey program?

Marilyn Burgess: We have reached out to the Commissioners Court to ask them to help us promote the survey. Judge Hidalgo has committed to promoting it on her website and social media. Mayor Sylvester Turner has also agreed to promote it on his site. What we’re looking for is, I think I know the reasons people don’t show up and what it’s going to take to increase the appearance rate, but I need statistically sound data to back it up to take it to the court to take it to approve any changes I want to make. This court is definitely data-driven, so we want to have scientifically sound data that support the request that we take back to the court, whether that’s an increase in juror pay, transportation vouchers, childcare vouchers, paid to park. We need to find out what it will take to make a difference to actually increase the appearance rate, particularly in our minority communities. That’s what we will go to court to ask for.

QOM: What happens when you start seeing the results that you’re waiting for and the results are not good, such as people not wanting to come to jury duty? What would you do if the numbers are low?

Marilyn Burgess: Jury service was suspended back in March, and it did not resume until July, and that was just for grand jurors. No trials. And then in August, we had one jury call for one trial. September, we had several. October, we had even more. So they’re beginning to increase. They’re trying to get back to normal. But that result of not having any jury trials from March until one in August has definitely created a huge backlog. So it’s taking people longer to get their case to trial. What we have seen, now that we have implemented resuming jury service and calling jurors, there’s a lot of cases that ask for a jury, they settle before they can get a jury. They know that we’re going to provide you with a jury, so you’re either going to go to trial or you need to settle. And before, nobody was motivated to settle because you go to trial if you don’t. Not that it isn’t an option, a lot of cases are settling. So we’ll have, like, any cases before October on the docket that we need to call juries for, at least a third or a half of them will settle before that day. Whenever a judge asks us for a panel, my office is responsible for providing that panel. Whatever those judges ask for, that’s who we call. And that means if we have to mail out 65,000 summons in order to get 1,000 people there, that’s what we’ll do. we will get the people there, even though we know the response rate is extremely poor right now because of the pandemic.

QOM: Are you providing this information for the Hispanic community? Do you have a Spanish website for people that may have a family that speak only Spanish?

Marilyn Burgess: Our social media is posted in both English and Span- ish. We have engaged Judge Hidalgo and Mr. Garcia in reaching out to other Hispanic collected officials to help get our message out so we can reach out to the Hispanic community. Bear in mind that one of the criteria for serving as a juror is, you have to read and write in English in order to serve. That is a qualification.

QOM: Is there any message you would like to give to the community, not just Hispanic, about filling out the forms?

Marilyn Burgess, We cannot deliver justice in Harris County without jurors. They are essential to the process and we need people to show up so that people can have their day in court. They have a right to a trial by a jury of your peers is guaranteed in the Constitution. We are going to provide that, but we have to have people that are willing to serve in order to do so. It’s just like the masks: don’t do it for yourself, do it for others. And we need you.

QOM: Ms. Burgess, thank you so much for your time. We appreciate all the answers you provided us

Marilyn Burgess And we are committed to making it safe as we possibly can. We want to make it safe for the jurors to show up and all the people working in the courts. I think they’re doing an excellent job at NRG Arena. We got a really good team out there. 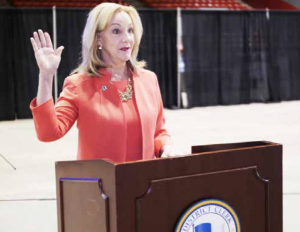