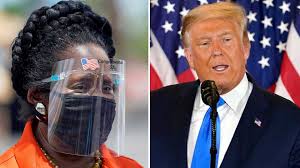 “Our Constitution was written as a guide for governing our democracy and to protect it from authoritarian and tyrannical control.  It also serves as a tool to protect our nation from both foreign and domestic enemies who intend to do harm to our Republic. At this moment in our history, our Constitutional forefathers are crying out for us to use the tools provided in this ageless document.  Yesterday, we saw domestic enemies incite violence and invade the people’s houses with the intent to harm. Enough is enough! The President has completely lost whatever moral authority he had and is unfit as Commander in Chief. His actions to incite violence against his own government and against the entire Congress warrants removal from office.  And if Administration officials refuse to invoke the 25th Amendment, I am moving forward with Articles of Impeachment to remove him from office for the following reasons:”

“Donald John Trump has actively and continuously endeavored to undermine the essential institutions and foundations of a democratic system of government in the United States, engaging in a long train of abuses and usurpations, pursuing invariably the same object, evincing a design to make himself an authoritarian ruler unaccountable to, and independent of, the people of the United States by:

“As the resolution points out and makes clear, a person ‘whose character is thus marked by every act which may define a tyrant, is unfit to be the ruler of a free people,’ and warrants impeachment and removal as President of the United States.”

The resolution can be found here.