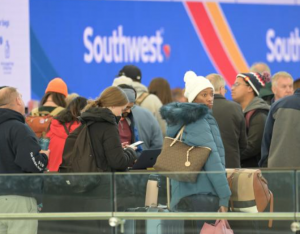 A punishing winter storm that dumped multiple feet of snow across much of America led to widespread flight cancellations over the Christmas holiday. By Monday, air travel was more or less back to normal – unless you booked your holiday travel with Southwest Airlines.

More than 90% of Wednesday’s US flight cancellations were Southwest flights, according to flight tracking website FlightAware. Southwest canceled more than 2,500 flights. The next highest: SkyWest, with 77.

Southwest warned that it would continue canceling flights until it could get its operations back on track. The company’s CEO said this has been the biggest disruption he’s seen in his career. The Biden administration is investigating.

What gives? Southwest had a combination of bad luck and bad planning.

The storm hit Chicago and Denver hard, where Southwest has two of its biggest hubs – Chicago Midway airport and Denver International airport.

More bad luck: The storm hit just as the so-called tripledemic surged across America, leaving people and their families sick with Covid, the flu and RSV. Although Southwest says it was fully staffed for the holiday weekend, illness makes adjusting to increased system stress difficult. Many airlines still lack sufficient staff to recover when events like bad weather cause delays or flight crews max out the hours they’re allowed to work under federal safety regulations.

But Southwest (LUV) also hurt itself with an aggressive schedule and by underinvesting in its operations.

Southwest’s schedule includes shorter flights with tighter turnaround times, which are causing some of the problems, Kathleen Bangs, a FlightAware spokesperson, told CNN.

Stranded customers have been unable to get through to Southwest’s customer service lines to rebook flights or find lost baggage.

Employees also said they have not been able to communicate with the airline, the president of the union that represents Southwest’s flight attendants told CNN Monday.

“The phone system the company uses is just not working,” Lyn Montgomery, President of TWU Local 556, told CNN’s Pamela Brown. “They’re just not manned with enough manpower in order to give the scheduling changes to flight attendants, and that’s created a ripple effect that is creating chaos throughout the nation.”

On a call with employees Monday, Southwest Chief Operating Officer Andrew Watterson explained that the company’s outdated scheduling software quickly became the main culprit of the cancellations once the storm cleared, according to a transcript of the call that was obtained by CNN from an aviation source.

The extreme cold, ice and snow grounded planes and left some crew members stranded, so Southwest’s crew schedulers worked furiously to put a new schedule together, matching available crew with aircraft that were ready to fly. But the Federal Aviation Administration strictly regulates when flight crews can work, complicating Southwest’s scheduling efforts.

“The process of matching up those crew members with the aircraft could not be handled by our technology,” Watterson said.

Southwest ended up with planes that were ready to take off with available crew, but the company’s scheduling software wasn’t able to match them quickly and accurately, Watterson added.

“As a result, we had to ask our crew schedulers to do this manually, and it’s extraordinarily difficult,” he said. “That is a tedious, long process.”

Watterson noted that manual scheduling left Southwest building an incredibly delicate house of cards that could quickly tumble when the company encountered a problem.

“They would make great progress, and then some other disruption would happen, and it would unravel their work,” Watterson said. “So, we spent multiple days where we kind of got close to finishing the problem, and then it had to be reset.”

In reducing the company’s flights by two thirds, Southwest should have “more than ample crew resources to handle that amount of activity,” Watterson said.

A lack of tools

The problems Southwest faces have been brewing for a long time, said Captain Casey Murray, the president of the Southwest Airlines Pilots Association.

“We’ve been having these issues for the past 20 months,” he told CNN. “We’ve seen these sorts of meltdowns occur on a much more regular basis and it really just has to do with outdated processes and outdated IT.”

He said the airline’s operations haven’t changed much since the 1990s.

“It’s phones, it’s computers, it’s processing power, it’s the programs used to connect us to airplanes – that’s where the problem lies, and it’s systemic throughout the whole airline,” he said.

Southwest CEO Bob Jordan, in a message to employees obtained by CNN, acknowledged many of Murray’s concerns, and promised the company will invest in better systems.

“Part of what we’re suffering is a lack of tools,” Jordan told employees. “We’ve talked an awful lot about modernizing the operation, and the need to do that.”

He said the airline is “committed to and invested in” improving its systems, but “we need to be able to produce solutions faster.”

President Joe Biden on Tuesday urged consumers to check if they’re eligible for compensation as cascading airline delays have disrupted holiday travel across the country.

“Our Administration is working to ensure airlines are held accountable,” Biden tweeted.

The US Department of Transportation said it is investigating.

To recover, Jordan told the Wall Street Journal the company plans to operate just over a third of its schedule in upcoming days to give itself the ability for crews to get into the right positions.

If this is all ringing a bell, that’s because this isn’t the first time Southwest’s service melted down in epic fashion. In October 2021, Southwest canceled more than 2,000 flights over a four-day period, costing the airline $75 million.

Southwest blamed that service meltdown on a combination of bad weather in Florida, a brief problem with air traffic control in the area and a lack of available staff to adjust to those problems. It has admitted it was having service problems caused by short staffing even before the thousands of canceled flights stranded hundreds of thousands of passengers.

Similar to this month’s service mayhem, Southwest fared far worse than its competitors last October. While Southwest canceled hundreds of flights in the days following the peak of October’s disruption, competitors quickly returned to normal service.

Later that month, on a call with Wall Street analysts, then-CEO Gary Kelly said the company had made adjustments to prevent a similar meltdown in the future.

“We have reined in our capacity plans to adjust to the current staffing environment, and our ontime performance has improved, accordingly,” said Kelly on October 21. “We are aggressively hiring to a goal of approximately 5,000 new employees by the end of this year, and we are currently more than halfway toward that goal.”

And, just like the latest disruption, the Southwest Airlines Pilots Association claimed the cancellations were due to “management’s poor planning.”