Vice President Kamala Harris on Wednesday pointed to Texas Republicans’ push for sweeping new voting restrictions as a key illustration of the need to restore federal oversight of elections.

While meeting at the White House with a group of Democratic members of the Texas Legislature, Harris pointed to the U.S. Supreme Court’s 2013 ruling to nullify the lynchpin of the landmark Voting Rights Act that kept states like Texas under “preclearance” of its voting laws to safeguard the rights of voters of color — a measure Democrats are hoping to bring back with new federal legislation.

“We have seen exactly what we feared when that case came down in 2013. Because that case was an opening of a door to allow states to do what otherwise we have protected against, which is states putting in place laws that are designed, in many cases quite intentionally, to make it difficult for people to vote,” Harris said. “And so this is what we’ve seen over and over again, and what’s happening right now in Texas is, of course, a very clear and current example of that.”

Harris’ remarks came at the start of a meeting with 16 Democratic members of the Texas Legislature. The vice president, who is leading the Biden administration’s voting rights efforts, invited the lawmakers to the White House after state representatives in May staged an 11th hour walk out of the state Capitol to break quorum and prevent a final vote on what is considered one of the most restrictive GOP-backed state voting bills following the 2020 election. On Wednesday, Harris called the Democrats “courageous leaders” and “American patriots.”

The bill Democrats defeated, Senate Bill 7, would have brought sweeping changes to Texas elections by restricting voting hours, narrowing local officials’ control of elections, further tightening the rules for voting by mail, and bolstering access for partisan poll watchers, among several other provisions.

It is just one of a series of Republican-backed bills that have been proposed in state legislatures across the country following the 2020 election during which former President Donald Trump pushed false and baseless claims of voter fraud. In Texas, Republicans have defended SB 7 as an “election integrity” measure meant to combat fraudulent votes, even though there is no evidence of widespread fraud.

In a series of meetings with U.S. senators and congressional leaders, Democrats have been using the trip — and the national attention their quorum break garnered — to push for a pair of federal bills that could preempt portions of the Texas legislation they temporarily prevented from becoming law and restore expansive protections for voters of color. With Republicans in full control of the Legislature, Gov. Greg Abbott has vowed to call lawmakers back this summer for a special legislative session to pass the bill into law.

The far-reaching federal For the People Act would overhaul elections, requiring states like Texas to offer automatic and same-day voter registration. Under the law, Texas would also have to drop its tight eligibility requirements for voting by mail, among several other changes to state law. The more narrowly tailored John Lewis Voting Rights Advancement Act could place Texas back under federal oversight so its election laws could not go into effect before the federal government ensured they wouldn’t undermine the voting rights of people of color.

Under preclearance, various sets of political maps and voting restrictions were placed on hold with federal courts repeatedly finding Texas lawmakers intentionally discriminated against voters of color in drawing them up.

“The many Democratic legislators here today in Washington, D.C. are the latest in a long line of Texans who have come to our nation’s capital to fight for election access and equality and to ask for federal oversight in order to protect the right to vote,” state Rep. Senfronia Thompson, D-Houston, said in a statement after the meeting. “Two weeks ago, in our state Capitol, Texas House and Senate Democrats stood united to stop a harmful voter suppression measure from becoming law. We’ve done our part. Now, we need Congress to do theirs.”

While several Texas Democrats expressed hope this week that their trip to Washington moved the ball forward in passing the legislation, it remains to be seen whether their efforts will do anything to break the stranglehold Republicans have on moving the Democratic agenda. 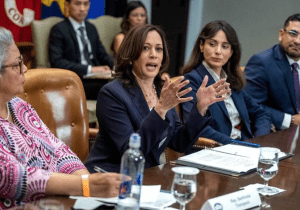 While the For the People Act has passed the House, it is short Democratic votes in the U.S. Senate. Both pieces of legislation also face a Senate procedural hurdle known as the filibuster, which sets a 60-vote threshold to bring the legislation up for a vote. Democrats have been unable to overcome that requirement, and two Democratic senators — U.S. Sens. Joe Manchin of West Virginia and Kyrsten Sinema of Arizona — remain as holdouts to eliminating the filibuster.

“We know we have a great challenge in front of us and therefore a fight, which is to fight for every American’s right,” Harris said on Wednesday, flanked by Thompson and state Rep. Gina Hinojosa of Austin in the Roosevelt Room.

Texas U.S. Sens. John Cornyn and Ted Cruz both oppose the legislation, criticizing the Democratic push behind them as an effort to diminish the state’s control of elections.

The White House discussion between Harris and state lawmakers was led by state Rep. Jessica González, the Dallas Democrat who serves as the vice-chair of the House elections committee, and centered on the coalition-building behind their efforts to pull down SB 7 as well as the role of Texas Democrats could play in forging a path forward on the federal legislation.

“The theme that came out of it is that we need to continue to build a broad-based coalition and really let Americans of all stripes understand the precarious nature of our democracy and the importance of our right to vote,” said state Rep. Rafael Anchía, D-Dallas, who chairs the Mexican American Legislative Caucus.