Myron Lewis, the Director of Pharmacy, said the vaccine is expected to arrive on December 16, with plans to begin administering the following day.

Lewis said UMC has two other backup freezers and each can hold up to 90,000 vials of the vaccine, but it must be kept cold.

The vaccines are shipped in a container with dry ice to keep them from falling out of that range during transportation.

“If it’s shipped directly from Pfizer then it’s in a container that has dry ice in it that will keep it usually without opening within 14 days,” Lewis said.

If it happens to fall out of the desired range once at the hospital, the freezers have an alarm system to notify staff.

“It’s going to set here and stay at 74 degrees if it gets out of the range about 5 degrees it also buzzes and it also is connected to a phone line and calls us to tell us it’s out of range,” Lewis said.

The vaccines will be taken from the freezer and then refrigerated to thaw them out before prepping according to Lewis. It will then be mixed at room temperature and should be taken within two hours.

“If it goes out of the range after stored 6 hours at refrigerated temperature then we have to destroy it,” Lewis said.

Each vial carries five does, according to Lewis. The hospital will begin training nurses this week ahead of the vaccine’s arrival since he says it’s mixed a bit differently than other vaccines.

“You gently rotate it, you have to rotate it up and down ten times like this to get it mixed, and then it’s ready to be drawn out,” Lewis said.

According to the Department of State Health Services, UMC is set to receive 2,925 vaccines as well as the second dose for each vaccine within 21 days of the first injection.

He mentioned he was looking into another partial curfew for Christmas and New Year’s Eve like the one he implemented for the Thanksgiving holiday.

“I’m going to do anything possible in my authority to stop the community spread,” Samaniego said. 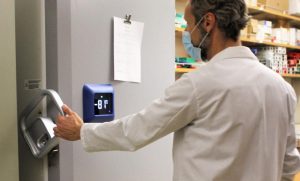