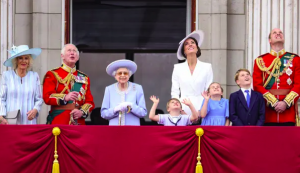 Four days of festivities for the Queen’s platinum jubilee kicked off on Thursday with a display of military pageantry, a patriotic crowd of many thousands and a royal reunion, as the nation marked the 70th anniversary of the longest reigning monarch in British history at trooping the colour.

Seventy years after she took her first salute as sovereign, mobility issues dictated that the Queen break with tradition, allowing the Prince of Wales to take the salute on her behalf at Horse Guards Parade. He was joined by the Duke of Cambridge and the Princess Royal.

The monarch, 96, skipped the physically arduous inspecting of the guard and instead acknowledged the salute of the returning Household Cavalry Mounted Regiment at the end of the parade from the Buckingham Palace balcony, accompanied by the Duke of Kent, 86.

Watching the parade from the Major General’s Office overlooking Horse Guards were the Duchess of Cambridge with Prince George, eight, Princess Charlotte, seven, and Prince Louis, four, who had taken part in their first carriage procession.

The Duke and Duchess of Sussex flew in from California with their children, Archie, three, and Lilibet, who turns one on Saturday. They were not included in the carriage procession to Horse Guards Parade but watched from the same office along with other royals. They are expected to attend a service of thanksgiving at St Paul’s on Friday.

There was one glaring absentee: the Duke of York. Stripped of royal patronages and affiliations after settling a civil suit in the US over sexual assault claims, he was not present. Family drama and scandal dictated the lineup on Buckingham Palace’s balcony for the RAF flypast marking the end of the ceremony, with no Andrew and no Harry or Meghan after “Megxit” and the couple’s accusations of racial hostility from the royal family.

Working royals only were to join the Queen on the balcony, she had decreed “after careful consideration”. On show as the Red Arrows roared over the palace trailing red, white and blue smoke above a cheering, flag-waving crowd were Charles and Camilla, William and Kate, Edward and Sophie, and Anne and her husband, Tim Laurence, joined by the less familiar faces of the Queen’s other working relatives, and the Cambridge and Wessex children.

This weekend Meghan will attend her first public engagement with the royal family since an awkward Commonwealth Day service in Westminster Abbey in March 2020. There is speculation that the Queen will meet Lilibet for the first time, or even that the Sussexes may have their daughter christened at Windsor.

The flypast of more than 70 aircraft including Apache helicopters, Typhoons and the Red Arrows thundered over a packed Mall, where crowds had gathered from early morning transforming it into a sea of red, white and blue. Union flag sellers did brisk business outside nearby tube stations. Cardboard crowns and corgis were popular. A small number of especially devout royal fans had camped overnight to secure the best vantage points. St James’s Park swiftly filled to capacity ahead of the ceremony, as did other viewing areas in central London as the Metropolitan police warned latecomers not to turn up.

This was the first major milestone the Queen has marked without Prince Philip, who died last year aged 99. Trooping the colour has marked the official birthday of the sovereign for more than 260 years, and is a staple annual event in the Queen’s diary.

Taking part were more than 1,400 soldiers and 250 horses from the British army’s Household Division. On this occasion the colour of the 1st Battalion The Irish Guards was trooped, led by their mascot, an Irish wolfhound called Seamus, in front of 7,500 ticketed spectators on Horse Guards Parade and another 7,000 at the Queen Victoria Memorial outside Buckingham Palace.