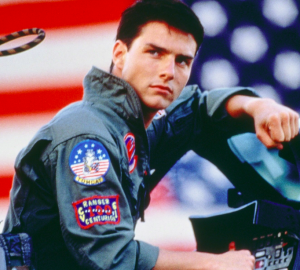 Thirty-six years ago, on May 16, 1986, “Top Gun” debuted in theaters. The movie became a global phenomenon, earning $360 million at the box office. And on Thursday, May 25, 2022, after more than two years of COVID delays, the highly-anticipated sequel, “Top Gun: Maverick,” will finally be released.

If you’re a guy who is currently between 35-45 years old, the original Top Gun was nothing short of a life-changing world event. I was too young to see it in theaters (in 1986 I was 4), but once the movie came out on the nascent VHS technology, I was taken by its mighty wings at Mach 3 with my hair on fire straight to the danger zone for life.

I watched the VHS so many times, my parents had to hide it from me. But I found it and kept watching. Over and over. When we were in the car, I made the whole family listen to my cassette copy of the soundtrack. Over and over.

Ask any guy in the aforementioned age range, and I guarantee you at some point in their early life they dreamed of being a pilot. Excuse me, not just a pilot. A “naval aviator.” And just like the aforementioned sentence, Top Gun quotes and memes have become an innate language in our daily vocabulary.

Fun fact: Mark Zuckerberg sprinkled Top Gun quotes and references in random places in the first version of TheFacebook.com. For no reason at all, the original footer line of the site read: “Too close for missiles. Switching to guns.” Mark Zuckerberg was born in 1984 and is currently 38 years old. He gets it.

So, needless to say, most guys between 35 and 45 are likely making the pilgrimage to a movie theater this weekend to buy a ticket for “Top Gun: Maverick.” And if the movie proves to be as successful as all indicators are… indicating, Tom Cruise is about to buzz the tower with an aircraft carrier-sized payday.

How much did Tom Cruise make for Top Gun 1?

Top Gun’s producers Jerry Bruckheimer and Don Simpson were probably shitting their pants when Legend bombed. Right as it was bombing, they were in the midst of filming Top Gun.

Thankfully for all involved, Top Gun was a smash hit, earning $360 million at the global box office. It was the highest-grossing film of 1986.

How much will Tom Cruise make from Top Gun 2?

In 1995 Tom and his former agent Paula Wagner established Cruise/Wagner Productions on the Paramount studio lot and set out to find a project to develop. At some point they were made aware of the fact that Paramount already owned the rights to the “Mission: Impossible” television series. Not only was Tom a fan of the show as a kid, he was intrigued to learn that Paramount had struggled for years to find a way to develop the asset into a film franchise. Cruise and Wagner soon struck a deal with Paramount to make “Mission: Impossible” their first production project.

Released on May 22, 1996, almost 10 years to the day from the Top Gun release, “Mission: Impossible” went on to earn $460 million on an $80 million budget. Between his acting salary, and more importantly, producing fee, Tom went on to earn $70 million from the movie.

He earned $75 million from the sequel and another $75 million for the third installment. By our count, Tom has earned around $300 million to date thanks to the “Mission Impossible” franchise.

Thanks to this franchise and around 20 years of similarly-amazing paychecks, heading into Top Gun: Maverick, Tom Cruise’s net worth is $600 million.

There’s a simple reason Tom makes so much money when he is the star and producer of a film. Not only does he typically set aside around $20 million for himself to cover his acting duties, he also receives a generous share of his projects’ backend points.

I reached out to a well-placed producer source today to learn more about Tom’s backend deal. According to my source, Tom Cruise is literally the only actor left in Hollywood who is still able to command a share of what is called “First Dollar Gross” on his own movies. First dollar gross literally means revenue, not profits. The dirty little secret in Hollywood is that no movies ever make a profit. A $500 million blockbuster ends up losing money thanks infamous studio accounting. So if an actor has points on backend profits, it might never result in extra money. But first dollar gross? That means if a movie makes $500 million and an actor has 10% of first dollar gross, he or she gets $50 million. First dollar gross is paid out even before movie theaters take a cut!

And according to my source, for “Top Gun: Maverick” Tom Cruise will be receiving 20% first dollar gross. That is truly unprecedented in today’s Hollywood.

If Top Gun: Maverick grosses $1 billion worldwide, which it is projected to do, Tom Cruise will earn…

If that happens, Tom will earn 100 times his original Top Gun salary. And honestly, this might be one of the only examples in film history where the payday is totally justified. This sequel would not exist without Tom’s acting, marketing and producing prowess.

If Tom does indeed earn $200 million, he will set the record for the largest single-film acting payday of all time. In doing so, Tom will slide Bruce Willis’ inflation-adjusted “Sixth Sense” payday into second place.

And remember boys, no points for second place.