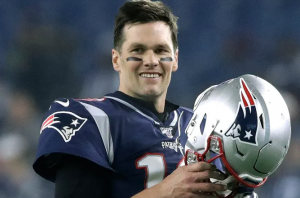 When NFL legend Tom Brady left the field at the end of the final game of the 2022 season, he was the league’s career leader in passing yards (89,214) and touchdowns (649). He also left with an estimated net worth of $512 million.

Brady made about $332 million playing quarterback for the National Football League’s New England Patriots and Tampa Bay Buccaneers for 23 seasons, the highest career earnings of any football player in history.

He achieved this despite never once being the highest-paid player in the league during his Hall of Fame career. His spot as the NFL’s biggest earner could be overtaken by fellow signal callers Aaron Rodgers or Matthew Stafford in the coming years if Brady elects to retire from the game.

Brady’s fiscal performance of the gridiron has been nearly as legendary as his work between the lines.

As of 2022, Brady had earned at least $180 million over the past 23 years from endorsements, licensing, appearances and memorabilia, according to estimates from Sportico. Brady’s endorsement calculation was made in May 2022, and any gains or losses Brady may have had since then are not included in that figure.

That endorsement total would put Brady’s net worth around $512 million if you combine his on- and off-field earnings.

Some of Brady’s lucrative endorsement deals are with Under Armour,  Ugg, and Upper Deck.

“The future is exciting,” he said on Instagram last year. “I’m fortunate to have cofounded incredible companies like @autograph.io @bradybrand @tb12sports that I am excited to continue to help build and grow.”

Last January, Autograph revealed a $170 million funding round, and the Bay Area native and University of Michigan alumnus has inked partnerships with sports betting company DraftKings to produce and distribute nonfungible tokens.

But not all of Brady’s financial moves have been successful. According to reporting from the New York Post and Forbes that analyzed court documents, Brady owned 1.1 million shares of the now-bankrupt cryptocurrency exchange FTX that were valued at roughly $45 million. FTX’s bankruptcy proceedings are ongoing, and changes to Brady’s net worth as it relates to his FTX investment have not yet been calculated.

It’s unclear if Brady will be paid anything for his FTX shares, but it seems unlikely. As the SEC points out, when it comes to bankruptcy, stockholders “are last in line to be repaid if the company fails.”

Brady has also agreed to a contract with Fox Sports to announce NFL games once he decides to retire. That deal is a 10-year contract worth up to $375 million, the largest in sportscasting history.

Total wealth analysis is not an exact science and cannot account for every single asset and liability an individual has.

It’s inevitable that Brady’s tenure as the top earner in the NFL will at some point come to an end. Last year, Buffalo Bills quarterback Josh Allen signed a $258 million contract, and Kansas City Chiefs quarterback Patrick Mahomes signed a $500 million deal the year before, per Spotrac. When the latter is paid out in full, Mahomes will likely have eclipsed Brady in terms of salary earnings.

“It’ll be one day at a time, truly,” Brady said about deciding on whether he’ll retire this offseason after the Bucs lost to the Dallas Cowboys on Monday night.