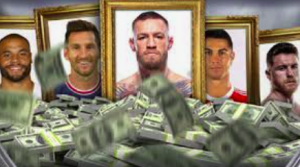 Forbes released its top 10 highest-paid athletes within the last 12 months on May 11 and PSG’s Lionel Messi came out on top. Three soccer players made the list—all in the top four—but the NBA had the most representation with four of their stars cashing in the most.

Messi led the list once before in 2019, but it’s worth noting his earning are down roughly $22 million from his last year in Barcelona. LeBron James is second on the list and broke the record he set last year for the highest-paid NBA player to ever appear on the list.

Combined, all the athletes on this year’s list earned $992 million over the last 12 months, which is a 6% drop from 2021, but the decline can be explained by Connor McGregor’s absurd $180 million total last year after he made roughly $150 million from the sale of his Irish whiskey brand.

Here’s the complete list of the top 10 highest-paid athletes of the last 12 months and their total earnings: