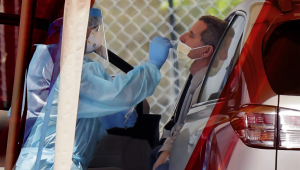 Texas on Tuesday reported more than 15,000 newly confirmed daily cases of the coronavirus amid spikes in cases and hospitalization as winter approaches.

The Texas Department of State Health Services also said 9,028 people were hospitalized across the state. Last week marked the first time Texas surpassed a daily count of 9,000 hospitalizations since a deadly summer outbreak.

During the summer outbreak, the state saw the numbers of new daily cases go just past 10,000 for the first time. Since late November, the new daily cases have soared past 10,000 on several days, with 15,103 new cases reported Tuesday, according to state health officials.

The true number of infections in Texas is likely higher because many haven’t been tested, and studies suggest people can be infected and not feel sick.

Researchers at Johns Hopkins University say Texas has had more than 23,000 COVID-19 related deaths so far, the second highest in the U.S.

Over the last two weeks, the rolling average number of daily new cases has increased by 17%, according to Johns Hopkins. The university says that one in every 309 people in Texas tested positive in the past week.

For most people, the coronavirus causes mild or moderate symptoms that clear up within weeks. But for others, especially older adults and people with existing health problems, the virus can cause severe symptoms and be fatal. The vast majority of people recover.