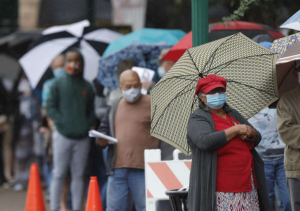 Texas is leading the country in ballots cast in the 2020 presidential election so far, with more than 4 million votes counted as of Sunday.

The Lone Star State is first in the nation in both the raw number of ballots cast and the total votes as a percentage of 2016 turnout, according to the U.S. Elections Project, a collection of voting statistics compiled by University of Florida professor Michael McDonald.

As of Sunday, more than 4 million Texans have voted in the general election, either through absentee ballots or in-person early voting, which began last Tuesday. Those ballots account for roughly 45 percent of the nearly 9 million total votes counted during the presidential election four years ago.

California, the only state with a higher population than Texas, has counted more than 3 million ballots to date, approximately 21 percent of 2016 turnout, according to the U.S. Elections Project. The state began its early voting period on Oct. 5.

In Florida, the third-most populous state, 2.5 million people have voted so far, accounting for roughly 26 percent of ballots cast in 2016. Early voting began across much of Florida on Monday.

Only Vermont has approached Texas’ turnout as a percentage of 2016 ballots cast. There, more than 130,000 ballots have been returned since early voting began on Sept. 21 — about 43 percent of the vote count four years ago.

Georgia, where nearly 1.5 million people have cast ballots, is approaching 36 percent of 2016 turnout. Early voting started there on Oct. 12.

Those statistics come as Texas is expected to break voting records this year, with some elections experts predicting up to 70 percent turnout. Nearly 17 million people are registered to vote in Texas this year, up almost 2 million from 2016, according to the Texas Secretary of State.