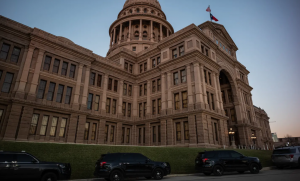 If Gov. Greg Abbott’s dream of a historic property tax break for Texans is to become a reality in the 2023 legislative session, the Republican-controlled Legislature might have to break the state’s constitutional spending limit for the next two years.

The question is: Would they dare?

The Texas Constitution limits the amount of additional money the state can spend every two-year budget cycle to the rate of the state’s economic growth. In the first public indication of how much tax money lawmakers can add to the 2024-25 budget, the Texas Legislative Budget Board — a panel of legislators led by Lt. Gov. Dan Patrick and House Speaker Dade Phelan — used population growth and inflation forecasts Wednesday to adopt a 12.3% estimated economic growth rate in the next budget cycle.

But that $12.5 billion figure is a little less than what it would cost for lawmakers to move forward with Abbott’s goal to use half the state’s estimated $27 billion cash surplus, driven largely by increased sales tax caused by inflation, on property tax relief.

It’s anyone’s guess whether lawmakers would back that promise in its entirety, made by Abbott in August during a heated race for reelection. Whether doing so would trigger the limit depends on a host of factors, including how well lawmakers are able to use budget strategies to avoid it.

If they can’t, then lawmakers could simply skirt the issue by spurning Abbott’s big plans, passing a much smaller property tax relief plan that doesn’t reach the spending limit, or even none at all — though by most accounts, the last option seems unlikely. Or they could vote by a simple majority to break the cap.

It’s a decision that is never simple for lawmakers.

“Historically, spending limits exist for a reason,” said John Hryhorchuk, senior vice president of policy and advocacy for the research group Texas 2036. “They are the guardrails that provide for fiscal sustainability for our state, so decisions to bust the spending limit have gravity to them.”

But it’s a vote that even the most ardent opponents of unrestricted government spending say is worth making if it returns money to Texans.

“Texans are being crushed by property taxes,” said Matt Rinaldi, a former legislator and chair of the Republican Party of Texas. “The only acceptable use of funds over the spending cap is to provide property tax relief to homeowners.”

Texas homeowners have some of the highest property tax bills in the nation, a byproduct of the state’s reliance on property taxes to pay for public schools and the state’s lack of an income tax. To lower property taxes on Texans, lawmakers would need to fund schools at a higher rate so that those districts could reduce the local tax burden on residents.

But Patrick said after the Legislative Budget Board meeting that he wouldn’t support busting the spending cap, which he said Abbott’s plan would likely do. Instead, he said, there are other ways to pass substantial relief, including homestead exemptions and a planned proposal to make it easier to spend more dollars in the state’s rainy day fund, without busting the cap.

The constitutional spending limit, which can be broken by a simple majority, has been in place for more than 50 years. A separate spending cap created in the 2021 legislative session applies to more funding streams, such as fees, but doesn’t count property tax relief toward the spending limit. That cap needs a three-fifths vote in both chambers to break and is among the strongest legislative spending caps in the nation, analysts say. It was also set at 12.3% on Wednesday and would allow a slightly larger budget increase, in dollars, under those rules.

Next session’s limit, which is among the highest that the LBB was considering on Wednesday, “leaves plenty of room” for property tax relief if lawmakers are conservative with the overall budget, said Vance Ginn, president of Ginn Economic Consulting and former chief economist for the Texas Public Policy Foundation, a conservative think tank.

“While there will be plenty of room under the decided spending limit in Texas, the Legislature should be especially prudent with taxpayer money by freezing the budget so that more surplus dollars are available to provide substantial property tax relief to combat the affordability crisis driven by D.C. and local governments,” he said. “The focus should be on less spending so there can be more tax relief.”

State agencies and universities across Texas are eyeing the surplus and making their pitches for tens of billions in new money for various programs and unfulfilled needs — ranging from bolstering mental health funding to building a new training facility for law enforcement. Collectively, those requests for new money add up to nearly $20 billion.

That doesn’t include proposed increases in their base budgets for things like public safety. It also doesn’t include continued funding for the governor’s Operation Lone Star border initiative, nearly half of which has been paid for outside of the appropriations process with dollars swept out of other agencies’ budgets to be replaced with federal funds. Abbott has not said how much he will request for that program yet.

But the single biggest wishlist item described by the state’s GOP leadership so far has been tax relief.

“Property tax should be at the top of the list. You start there, and you work down,” Patrick said Wednesday.

Budget writers have decades of experience writing budgets in such a way that they can usually avoid busting spending limits — but the bigger the number, the harder it is to couch it in budget moves like cuts to other agencies, new dedicated funding streams, constitutional amendments and federal funding conversions.

So could conservative voters — a group that doesn’t typically approve of unlimited government spending — be convinced that breaking the spending limit is a good idea?

While Patrick asserts that it would be a hard sell, the conservative grassroots say it can be done.

“Absolutely for tax relief purposes,” said James Quintero, policy director for the conservative Texas Public Policy Foundation. “On both sides of the aisle, you have big, bold ideas being pitched, which signals to me that we’re in for a transformational tax reform session where all sides agree that meaningful action is needed right now, and they’re getting ready to take it.”

But lawmakers could risk the ire of voters who support using the surplus to raise teacher pay and retirement benefits, better funding for schools and social programs, or addressing other underfunded needs, said Eva DeLuna, a budget analyst at the progressive think tank Every Texan.

“Legislators always have a tougher time when they have unallocated revenue because then they have to come up with a reason why it’s not OK to … deal with an existing responsibility,” she said.