Texas on Sunday recorded its 30,000th death from COVID-19, according to a Houston Chronicle analysis, making it the second state in the country to surpass the milestone.

The development coincides with a sharp spike in statewide deaths, which reached a rolling seven-day average of nearly 279 on Sunday, the highest mark since early August.

Texas’ rate of tests coming back positive also peaked earlier this month at nearly 21 percent, surpassing the previous high set during early July, shortly after Gov. Greg Abbott ordered bars to close and issued a mask mandate for most of the state.

Harris County, Texas’ most populous county, leads the state with 3,588 deaths. Only eight other counties across the U.S. have recorded more deaths from the pandemic, according to data compiled by Johns Hopkins University.

The statewide death tally is based on an analysis of official data from the Texas Department of State Health Services and the Chronicle’s reporting. 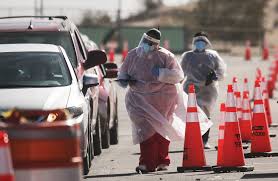