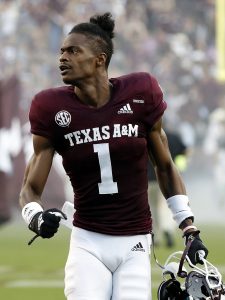 Former Texas A&M football wide receiver Demond Demas, who was suspended by the university last week after an arrest stemming from an alleged assault of his girlfriend, has reportedly been linked to a separate assault incident. The Houston Chronicle reports that Demas is the subject of an investigation into an alleged assault of another girlfriend in 2020.

The Brazos County district attorney’s office did not pursue charges during the period of which the latest allegations occurred due to not enough overall evidence and conflicting testimonies, a law enforcement official told The Chronicle. But the case remains open with the Texas A&M University police department. An investigation into the 2020 incidents is also ongoing under Title IX, The Chronicle reports.

Demas was previously arrested on a charge of assault family violence that occurred the weekend of Feb. 26, according to documents obtained by The Chronicle. The alleged victim contends Demas “pushed her head into the wall’ and later “grabbed her and threw her from off of the bed onto the floor, which caused her top front teeth to go through her bottom lip.” Demas reportedly turned himself into authorities on March 2 and was released later that day after posting a $5,000 bond.

A Texas A&M spokesperson confirmed to GigEm247 earlier in the week that Demas was suspended by the university and is no longer with the football team.

Demas caught 15 passes for a total of 235 yards and a touchdown during Texas A&M’s 2021 season, recording stats in eight games, playing in 10 games total and making six starts. He appeared in four games during his first year on campus in 2020 but did not record stats.

Demas was reportedly on the other end of an assault incident later in the week by family members of the assault victim from the February incident. The parents of the alleged assault victim were arrested Thursday by campus police after a confrontation with Demas turned violent, according to The Chronicle. The father of the alleged victim assaulted Demas while the victim’s mother assaulted a female relative of Demas prior to an on-campus conduct hearing for the ex-Aggies receiver regarding the initial incident, according to The Chronicle.

Neither Demas nor his relative suffered significant injuries, according to The Chronicle. The parents of the alleged assault victim were taken to Brazos County Jail, with both facing a misdemeanor charge of assault.