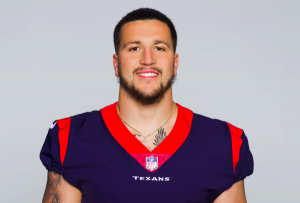 Texans linebacker Garret Wallow was back on the field for his first regular-season game since his rookie season last year.

Since spraining his left ankle during training camp, Wallow had been sidelined and made his return Sunday during a 23-20 road loss to the Chicago Bears at Soldier Field.

He had a solo tackle on special teams, appearing in 22 percent of defensive snaps and 66 percent of the special-teams snaps.

“I feel like it was good, first game back, kind of getting my groove back on things, getting back a feel for the game,” Wallow said. “Obviously, it was my first game back since last year. Just felt good to be back, get that game feeling back. It felt real good. Obviously, you just trust it more and more each time I’m out there.”

A fifth-round draft pick from TCU last year, Wallow had 23 tackles, two for losses and one sack in 17 games and two starts. He had 15 solo tackles. Instinctive and athletic, Wallow notched his first career sack, bringing down Jacksonville Jaguars rookie quarterback Trevor Lawrence, the top overall pick of the draft, last season. He recorded a game-high and career-high 11 tackles in his first career start against Jacksonville.

Now, the Texans are readying for all-purpose Los Angeles Chargers running back Austin Ekeler on Sunday at NRG Stadium.

“Every week, you play very good backs, especially Austin Ekeler,” Wallow said. “He’s a very shifty back. He’s a vet. He’s talented. He’s really good. We have to have that mindset every week you go to war, wrap up and tackle better.”

The Texans allowed 281 rushing yards against the Bears with most of the damage inflicted by backup running back Khalil Herbert after starter David Montgomery injured his knee and ankle.

The Texans’ tackling was substandard again, drawing the ire of coach Lovie Smith.

“Everybody has to do their job, everybody has to tackle better,” Wallow said. “That’s an improvement we need for the whole defense. It’s something we obviously need to prioritize. It’s huge. We need more takeaways. We need more punch-outs to get the ball in our offense’s hands. It’s a lot of things. It’s fits, it’s pursuit angles. We need the right judgment in the game. No matter what, get the guy down.”