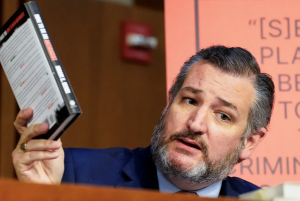 And during his questioning of the federal appellate judge, U.S. Sen. John Cornyn said the Supreme Court’s landmark gay marriage decision in 2015 created a new right not explicitly stated in the Constitution.

Cruz and Cornyn both sit on the Senate Judiciary Committee, which is evaluating Jackson’s nomination in a multi-day hearing.

In one-on-one questioning, Cruz first noted that Jackson had called the thesis of “The 1619 Project” — a Pulitzer Prize-winning New York Times project that examines U.S. history from the date when enslaved people first arrived on American soil — “provocative.” Then, he used her position as a board member at the private Georgetown Day School to question her views over what he referred to as critical race theory.

“If you look at the Georgetown Day School’s curriculum, it is filled and overflowing with critical race theory,” Cruz claimed, holding up copies of books that he says are assigned or recommended in the school’s curriculum.

Jackson was insistent that as a member of the Georgetown school’s board, she has no control over its curriculum and teachings.

“I have not reviewed any of those books, any of those ideas — they don’t come up in my work as a judge, which I am, respectfully, here to address,” Jackson responded when asked whether she was comfortable with the lessons in one of the books Cruz mentioned, “Antiracist Baby” by Ibram X. Kendi.

Critical race theory is a university-level academic framework that seeks to examine the intersections between race and law. It is generally not taught in K-12 education — a fact Jackson mentioned during the hearing. Conservatives have turned the term into a polarizing issue locally and nationally, using it to describe a variety of classroom discussions about race and alleging those conversations are discriminatory against white children.

While these hearings are supposed to be a chance for the committee to vet and evaluate presidents’ nominees, they have also become a form of theater where politicians — especially those with large social media followings — can create soundbites and viral videos to boost their image. Cruz, who ran for president in 2016 and brought posters to display during his questioning, is one of many Republicans on the committee with reported future presidential ambitions.

The Georgetown school was founded during an era of legally segregated schooling when a multiracial group of families came together to support integrated education. After the Black Lives Matter protests during the summer of 2020, the school developed an anti-racism action plan that its website says is underway.

One of the Georgetown school’s web pages displays a list of anti-racist resources for both adults and children, which includes some of the books Cruz presented. It was unclear whether the school requires any of the books he mentioned, and the school did not immediately respond to a request for comment on the matter.

Conservative opposition to how race is taught in public schools led to a new Texas law that limits the discussion of current events and race in the classroom. That law also bans schools from requiring students to read “The 1619 Project.” Candidates for local school board races — and Texas’ State Board of Education — have made opposition to so-called critical race theory a key component to their campaigns.

Cruz, who was classmates with Jackson at Harvard Law School, has not supported any of Biden’s judicial picks, and his comments Wednesday suggest that trend is unlikely to change with Jackson’s nomination.

Cruz also criticized Jackson’s record on sentencing child pornography offenders as too lenient — a line of questioning that Republicans on the committee have used to paint the nominee as soft on crime. But fact-checkers have said Republican comments are misleading.

Republicans on the committee have pledged to keep the confirmation proceedings civil, which they say contrasts with Democrats’ treatment of President Donald Trump’s nominees to the Supreme Court.

The hearing will continue Wednesday and is expected to wrap up Thursday with outside testimony.

Democrats have pledged to advance Jackson’s nomination out of committee — a vote that could take place in the coming week — and onto the Senate floor as quickly as possible. Supreme Court nominees have been confirmed in mostly party-line votes in recent years.

When Jackson was confirmed to her current position on the U.S. Court of Appeals for the District of Columbia Circuit, she received three votes from Republicans in addition to a “yes” from every Democrat. The Senate has also confirmed her to a U.S. district court and the U.S. Sentencing Commission.

U.S. Rep. Sheila Jackson Lee, D-Houston, has attended the hearing since its start and noted a personal connection to the nominee, as they are both descendants of enslaved people. Lee pushed back on Republican scrutiny of Jackson and praised her poise during the hearing, which was slated to last for more than 10 hours Tuesday.

“She did not get flustered,” Jackson Lee, who has a law degree and is a senior member of the House Judiciary Committee, told The Texas Tribune outside the hearing chamber. “She kept the demeanor that is appropriate for the court.”

Earlier Tuesday, Jackson Lee called a tweet from the Republican National Committee showing “KBJ” — the nominee’s initials — being crossed out and replaced with “CRT” — a reference to critical race theory — a “racial attack.”

During Cornyn’s questioning of Jackson, the senator asked the Supreme Court nominee about her perspective on the reasoning that led to the decision in Obergefell v. Hodges, the Supreme Court case that legalized gay marriage. Cornyn, who called Jackson’s nomination “long overdue,” said the court created a new constitutional right with the landmark ruling.

“When there is a right, it means that there are limitations on regulation, even if people are regulating pursuant to their sincerely held religious beliefs,” Jackson said, later noting that she was not in a position to comment about her personal views on the matter.

Cornyn sparked some controversy when he said that Jackson had called former President George W. Bush and his Secretary of Defense Donald Rumsfeld “war criminals.” In response, Jackson said that she could not remember the particular reference.

The reference in question comes from petitions that Jackson filed while working as a federal public defender assigned to Guantánamo Bay detainees. The petitions describe that the U.S. government had allegedly tortured the detainees — actions which they say constitute “war crimes and/or crimes against humanity.” Bush and Rumsfeld are named as respondents to the petition in their roles as government officials.

“If you accuse someone of war crimes you are calling them war criminals,” Cornyn tweeted after his questioning.