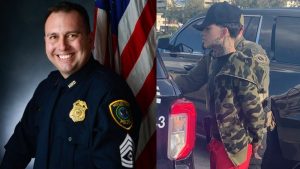 The man accused of killing a Houston police sergeant is now in custody.

Robert Soliz, 24, was booked into jail Tuesday 24 hours after the shooting death of Sgt. Sean Rios.

Rios was killed Monday afternoon in the 7900 block of the North Freeway after police say he engaged the Soliz in a gun battle. After being shot, Rios ran into the Taj Inn & Suites motel looking for help and collapsed. He was declared dead at the scene.

HPD Chief Art Acevedo said Rios was headed to the airport for his 2 p.m. shift when he was involved in the shootout. Authorities and witnesses say the officer, who was wearing plain clothes, was shot multiple times.