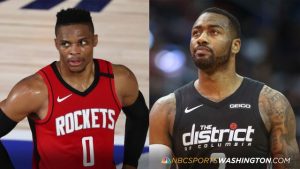 “The Washington Wizards have acquired former NBA MVP and nine-time All-Star Russell Westbrook from the Houston Rockets in exchange for John Wall and a future lottery-protected first-round pick.

“Having the opportunity to acquire a player of Russell’s caliber and character was something that we could not pass up when looking at both the immediate and long-term future of our team,” said Wizards General Manager Tommy Sheppard.  “With that said, the decision to part ways with John, one of the greatest players in franchise history, was extremely difficult.  What he has meant to our organization and our community is immeasurable and will not be forgotten.”

As much handwringing as there has been over Westbrook’s and Wall’s massive contracts, there’s a clear difference between the players. Westbrook is better. That’s why the Rockets get a first-round pick from the Wizards.

Westbrook made the All-NBA third team last season, his sixth straight year on an All-NBA team. Wall hasn’t played even a majority of Washington’s games in any of the last three years and missed last season entirely.

As Houston downgrades, attention intensifies on James Harden, who also requested a trade from the Rockets. If he was unhappy playing with Westbrook, a friend, why would Harden be more enthused about playing with Wall? Also a driver with limited outside shooting ability, Wall brings similar fit concerns as Westbrook. Wall is just not as good.

This looks like a prelude to an eventual Harden trade. If dealing Harden anyway, which would almost certainly drop Houston from championship contention (real or imagined), the Rockets might as well get a first-round pick for Westbrook.

The Wizards are trying to win now, because that’s just how they operate and because Bradley Beal could soon choose to leave if the team doesn’t get on track.

Westbrook and Beal immediately form one of the NBA’s most-intriguing backcourts. But there are questions about how they’ll share the ball and Westbrook’s career arc. He’s 32, extremely reliant on athleticism and facing health concerns. At least Wizards coach Scott Brooks, who coached Westbrook with the Thunder, has experience working with the point guard.

In Houston, Wall an DeMarcus Cousins finally unite. But they appear to be past their primes. Both are 30 with extensive injury histories. Cousins even had to settle for an unguaranteed contract. At least Wall was fortunate enough to lock in a super-max extension when he had the opportunity.

Whatever this trade lacks in eventual production, it carries major name recognition.

This is just the second time two players with at least five All-Star selections have been traded for each other.