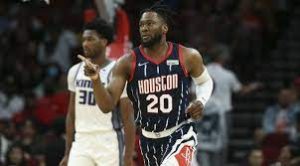 The Houston Rockets would like to add center depth behind second-year starter Alperen Sengun, but they have a clear incentive to avoid longer-term salaries that could hinder their salary cap flexibility in 2023.

According to Kelly Iko of The Athletic, the Rockets are exploring big-man additions for 2022-23 via a two-way contract (for one season).

Iko named Moses Brown and Freddie Gillespie as potential candidates, along with the possibility of re-signing Bruno Fernando or calling up Mfiondu Kabengele from Houston’s G League affiliate, the Rio Grande Valley (RGV) Vipers. There is no clear timetable for such a move.

Internally, the Rockets have veteran big man Boban Marjanović and second-year forward Usman Garuba as candidates to play beyond Sengun. But neither is a proven, consistent NBA rotation player, so it makes sense for Houston general manager Rafael Stone to explore outside additions — particularly if they are cap friendly.

Time will tell on whether any of these potential deals materialize. Another plausible candidate could be 6-foot-9 big man Aric Holman, who continues to play well for Houston’s 2022 summer league team.