This year, and following all security measures and in full compliance with local authorities and public health recommendations, the ultimate platform to showcase the best of Latin music and culture included special tributes and moments to continue uniting and highlighting our community through music, culture, and hope.

Followed by  Maluma,  who performed for the first time his songs “Agua de Jamaica,” and “La Burbuja” from his new visual album, #7DJ (7 Días En Jamaica). 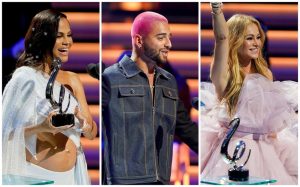 Chesca and Grupo Firme blessed the audience with “El Cambio,” a Spanish language interpretation of “The Change” initially performed by superstar JoJo. Chesca’s arrangement was chosen to be used in a Joe Biden and Kamala Harris 2020 campaign video.

Gloria Trevi received the Premio a la Trayectoria to celebrate the 30th anniversary of her album, Tu Angel de la Guarda, and her iconic and hit song “Pelo Suelto.” The Mexican singer performed “Todos me Miran,” “Grande,” and “Gloria” alongside Ivy Queen.

El Alfa took the stage one more time to sing with Camilo their new song, “BEBÉ.”

Luis Fonsi and Rauw Alejandro performed “Vacío,” a new spin on the classic “A Puro Dolor” by Son By Four. After announcing Paulina Rubio and Raymix as the winners of “Mejor Canción de Cumbia del Año,” for their hit “Tú Y Yo,” Maluma and  Carlos Rivera  took the stage of “Premio lo Nuestro” to sing the heartfelt song “100 Años.”

The entire Montaner family, Mau, Ricky, Evaluna, and Camilo, and Ricardo Montaner, performed “Amén,” a Christian anthem written long before the global pandemic but released during this challenging time.

Vice-President Kamala Harris sent a message to the Hispanic and Latinx community and congratulated all the winners. Justin Quiles later performed “Jeans” and “PAM,” and La India and Victor Manuelle joined their voices to sing their new salsa single “Víctimas las dos.”

The night continued with Selena Gomez and Rauw Alejandro releasing a new video for “Baila Conmigo.”

Anuel AA and Ozuna were among the last performers of the night. The 33rd edition of “Premio Lo Nuestro” ended awarding Camilo as “Artista del año-pop.”