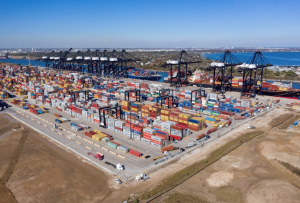 Truck gate operations have resumed Thursday afternoon at Barbours Cut and Bayport Terminals, following the resolution of computer hardware issues that closed both terminals to truck traffic for two and a half days. “Extended gate times are planned through the weekend – or as long as needed – until the business is caught up,” Port Houston Executive Director Roger Guenther said.

Guenther expressed regret to customers and partners, including truckers, and appreciation for their patience while resolving the issue. Guenther said, “We will take a strong look to find what caused the problem, and measures will be put in place to help prevent it from happening again.”

In more Port Houston news, the U.S. Army Corps of Engineers renewed the federal permit for Port Houston’s Bayport Terminal. This significant milestone was officially announced and applauded during the July meeting of the Port Commission of the Port of Houston Authority held last week.

This crucial permit allows Port Houston to continue its master plan for construction to build out the Bayport Terminal, which includes its current $200 million expansion program to complete Wharf 6, Container Yard 2, and other projects – part of Port Houston continuing efforts to remain ahead of accelerating demand.

Port Chairman Ric Campo also announced Port Houston was on track in the coming weeks to enter into a Project Partnership Agreement or PPA with the Army Corps, a key step in Project 11 widening construction program of the Houston Ship Channel.

Signatures and other final actions began processing this week, and a formal announcement is planned. Container volume recorded a 39% increase over last June, Executive Director Roger Guenther told the commission in his staff report. Port Houston has handled containers totaling more than 1.6 million twenty-foot equivalent units (TEU) at the midpoint of 2021, reflecting a 13% increase. Underscoring the constant increase in business, he notes “imports continue to pour into Houston as we continue to reach new record highs for gate moves and single vessel moves.”

Further highlighting the escalating momentum of the container business, Guenther shared that for the first time ever, Barbours Cut Terminal outpaced Bayport in loaded container gate moves (15,000 vs. 14,000) during the month of July, as a new record was also set at Barbours Cut with 5,687 single vessel moves working The ONE Matrix.

Emphasizing Port Houston’s sustainable operations efforts, Guenther noted that Bayport had just received five new hybrid-electric rubber-tired gantry cranes (RTGs), with the next delivery of an additional four RTGs expected in August. He added that that the beginning construction stages for Wharf 6 at Bayport can now be seen. The project began last month and will take nearly two years to complete.

Chairman Campo praised U.S. Senator John Cornyn and U.S. Representative Sheila Jackson Lee for providing leadership in Congress as the primary sponsors of legislation making Juneteenth a federal holiday. Congresswoman Jackson Lee personally expressed her appreciation for this support of the Juneteenth holiday and underscored her continued support of the channel expansion project as well.

Chairman Campo emphasized that Juneteenth, “is not only important to Texans but is important to all Americans…we are grateful for it becoming law and receiving the recognition it has long deserved.”

The next regular Port Commission meeting will be held on September 28th in person at the Port Houston Executive Office Building located at 111 East Loop North, Houston, TX 77029.