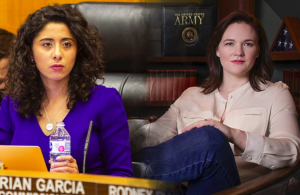 Conducted by the Hobby School of Public Affairs at the University of Houston, the survey queried 321 registered voters between June 27 and July 7, 2022, and the school gives a confidence interval of =/-5.47%.

Among likely voters, Democrat Hidalgo led with 48 percent to Republican del Moral Mealer’s 47 percent. Another 5 percent said they were undecided.

Some results may indicate strength for del Moral Mealer among Independent voters, and the survey notes that among the “small number of voters who plan to vote for a minor party gubernatorial candidate or are unsure about their gubernatorial vote intention, del Moral Mealer holds a nearly two to one advantage over Hidalgo.” 57 percent of these respondents chose del Moral Mealer, 29 percent chose Hidalgo, and 14 percent were undecided.

According to U.S. Census numbers, as of July 2021 Harris County is 69 percent white, 44 percent Hispanic or Latino, and 20 percent black.

In a region that has seen skyrocketing homicide and violent crime, 78 percent of survey respondents listed crime and public safety as being among the most important issues in this year’s election. Another 72 percent listed government corruption, which may be a reflection of various county scandals including the felony indictment of three of Hidalgo’s staffers earlier this year.

Commissioner Jack Cagle (R-Pct. 4), who is facing Democrat challenger Lesley Briones this year, has a net favorable rating of +9 percent to Briones +2.

Harris County District Attorney Kim Ogg, who handily won re-election in 2020 and has sparred with Hidalgo over funding for prosecutors, was viewed favorably by 30 percent of respondents and negatively by 40 percent.

In a statement in response to the survey, del Moral Mealer said the poll showed what residents “already knew – the ideologically driven policies of Lina Hidalgo’s government do not reflect the priorities and values of Harris County residents. Crime and corruption are the top issues for Harris County voters, and she has failed miserably on both.”

“We all deserve to live in communities of which we are proud and in which we feel safe.”

Hidalgo had not issued a response at the time of publication.