Lake made the announcement Wednesday during a press conference in Austin to give an update on “improvements” public utility providers have made to ensure there won’t be a complete infrastructural meltdown, resulting in 4.5 million Texans being without power or heat for days.

“At both ERCOT and the PUC, we are operating at lightning speed to improve operations, enhance our grid, and ensure reliability for this winter,” Lake said. “For the first time ever, we’ve gotten improved checks and balances to ensure a higher level of reliability than we’ve ever had.”

Wednesday’s vote of confidence follows a new law requiring power plants to winterize their facilities. While the law mandates the move, it doesn’t outline a schedule or deadline to go about doing so.

Lake, who was joined by interim ERCOT CEO Brad Jones, outlined one. 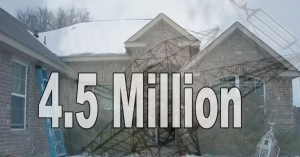 “We began on Dec. 2 with those inspections,” Jones said. “During this inspection cycle, between Dec. 2 and Dec. 29, we intend to inspect over 300 generating and some 21 transmission providers,” Jones said.

Jones added that some 55 power generator units have been inspected thus far. Power generators were supposed to file a winter weather readiness report by Dec. 1, in addition to ERCOT’s in-person inspections. The Public Utility Commission has filed violation reports against eight companies for failing to meet that deadline.

Lake said violations for power providers who don’t abide by the requirement to winterize could amount to $1,000,000 in fines per day, per violation.

“We go into this winter knowing that because of all of these efforts the lights will stay on. No other power grid has made as remarkable changes in such an incredibly short amount of time as we have,” Lake said.

The Public Utility Commission has oversight over electric power generators. It does not regulate natural gas. That falls under the responsibilities of the Texas Railroad Commission.

“In conjunction with the railroad commission, we will continue mapping more granularly the natural gas critical infrastructure across the state and importantly, in conjunction with the Texas Division of Emergency Management, the Texas energy reliability council is up and running to enhance communication and planning between state agencies, the electric industry, and natural gas industry,” Lake said.

Lake said a multitude of improvements reinforce his confidence that the grid will sustain in the event of another winter storm.

Lake said there is not a contradiction, rather, the SARA report analyzes several scenarios that don’t take into account the changes he said the organization has made to better ensure regulation.

“It does not incorporate all of the extraordinary measures I’ve outlined today. It’s excellent for scenario analysis. It’s not a promise of an outcome,” Lake said.