Less than a week into the new year, the rate of COVID-19 infections and the number of people hospitalized in Texas for COVID-19 are at record levels, while the 7-day average for new cases and deaths are spiking — but only about a third of the vaccine doses allocated for Texans have been given out, according to state numbers.

As Texas health care providers predict that the state’s COVID-19 numbers will get even worse, questions continue to swirl about the state’s vaccine distribution for the 1.9 million Texans who were eligible for the first phase and the millions more who fall into the second tier of eligibility.

The seven-day average positivity rate for confirmed coronavirus tests has exceeded 20%, doubling levels that Gov. Greg Abbott called a “red flag” early in the pandemic. And the number of people hospitalized for COVID-19 on Monday stood at 15,976, up 1,610 from a week ago and exceeding the previous highs reported last summer.

“Just this morning, I heard of two people’s parents passing related to COVID over New Year’s, and thought to myself, ‘Wow, and everyone went to go visit their parents [during the holidays],’” said Dr. Glenn Hardesty, an emergency physician at Texas Health Presbyterian Hospital Plano. 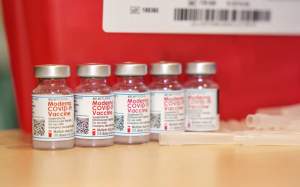 He said health providers expect that “the laxity around social distancing and precautions” combined with holiday travel is going to place even more pressure on an already stressed health care system.

“We’re preparing for that as best as we can, but the capacity is not infinite,” Hardesty said.

On Monday, state health officials announced that 325,000 additional vaccine doses would be getting into the hands of 949 providers in 158 Texas counties over the next week, part of the first round of vaccinations for frontline health workers as well as nursing home residents, Texans over 65 and those with certain medical conditions, among others. Some 121,875 doses are earmarked for long-term care facilities such as nursing homes and assisted-living centers.

But with the number of vaccine doses available still falling far short of what’s needed to cover those who are eligible — and with state officials pushing hospitals and other providers to administer vaccine doses that the providers say they don’t have, aren’t sure are coming or have already administered — confusion and frustration have surrounded the initial few weeks of the vaccination rollout.

Providers have 24 hours to report their vaccination statistics to the Department of State Health Services, and the agency updates its numbers each afternoon with data reported by midnight the day before, so the state’s numbers could lag up to two days behind the reality on the ground.

Officials from the White House down to local doctors have warned that it would take months to have vaccine doses available to everyone who wants one.

“The problem is unrealistic expectations based on the reality on the ground,” said Marshall Cothran, CEO of the Travis County Medical Society, which received 700 doses through a local partnership and had them all scheduled within 48 hours for physicians and staff who are not affiliated with hospitals or other care organizations.

With the new shipments this week, the state has been allotted a total of 1.5 million doses through the first four weeks of distribution, officials said Monday. Providers in 214 of the state’s 254 counties will have received shipments by the end of the week, health officials said.

Some 793,625 doses had been received by providers by midnight Sunday, according to the Texas Department of Health Services.

Of those, 414,211 — just over half of those delivered — had been administered, according to the agency’s dashboard.

Hardesty said the nearly 16,000 doses his facility received are being administered “fast and furiously,” and about 10,000 people have gotten their first dose, with second doses to start in the next week.

“We’re giving them as quickly as we can,” he said.

This week also marked the beginning of the second round of doses for those who were among the first to be vaccinated. Some 224,250 doses, earmarked for those who received their first dose in mid-December, are being sent to providers this week, state health officials said on Monday.

Chad Bush, a CT technologist at Methodist Dallas Medical Center, got his first dose in mid-December and his second dose on Monday and said the process seems to be going smoothly at the hospital.

“Everybody that I know about at my facility, they are getting their second shot,” Bush said. “Hopefully, this is a light at the end of the tunnel for us.”