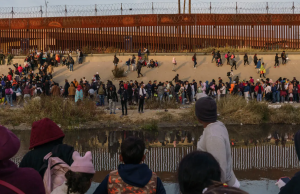 The temporary stay in lifting the pandemic rule known as Title 42 is a provisional victory for 19 states, led mostly by Republicans, that had sought to keep it in place on the border.

The Supreme Court said on Tuesday that a pandemic-era health measure that restricted migration at the southern border would remain in place for the time being, delaying the potential for a huge increase in unlawful crossings.

In a brief unsigned order, the justices halted a trial judge’s ruling that would have lifted the measure, known as Title 42, which has allowed even migrants who might otherwise qualify for asylum to be swiftly expelled at the border.

The court said that it would hear arguments in the case in February and that the stay would remain in place pending a ruling. The justices said they would address only the question of whether the 19 mainly Republican-led states that had sought the stay could pursue their challenge to the measure.

President Biden said a decision on Title 42 was overdue, adding that in the meantime the public health order must be enforced.

Karine Jean-Pierre, the White House press secretary, said that the White House would be “advancing our preparations to manage the border in a secure, orderly and humane way when Title 42 eventually lifts and will continue expanding legal pathways for immigration.”

The decision comes as border towns have already been struggling with a swelling number of crossings by migrants from many countries, mainly in South America and Asia, whose nationals have not been subject to the expulsion policy. While temporary, the court decision offers a reprieve for the Biden administration, which had been preparing for the possibility of thousands of additional migrants a day, had the policy been lifted.

“The administration asked to end Title 42, but there was no clear plan for how they would have managed the inevitable influx,” said Justin Gest, a professor at George Mason University who studies the politics of immigration.

“The ruling brings a sense of relief that officials may not publicly acknowledge,” he said.

The number of migrants apprehended at the southern border already surpassed 9,000 per day on three occasions in a 10-day span in December, a record number. About 1,500 people, mostly Nicaraguans who had been victims of a mass kidnapping in northern Mexico, crossed from Ciudad Juárez to El Paso on Dec. 11 alone, straining the city’s shelters and prompting migrant families to sleep on the streets in freezing temperatures.

Still, humanitarian organizations that operate shelters along the U.S. side of the border derided the court decision. They said it keeps in place a policy that is preventing migrants who are fleeing violence and persecution from obtaining the safe harbor to which they are entitled under U.S. and international law.