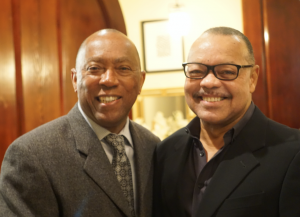 “Today, I have lost a close friend, a trusted confidant, and a man who has been like a brother to me since shortly after the day we met at Harvard Law School.

“Jimmie Lee Solomon came from humble beginnings, but he was the epitome of what it meant to build a successful life by working hard and making a difference in others’ lives.
He was born in the small town of Thompsons, Texas, in Fort Bend County and later attended Dartmouth College, where he played football and earned a degree in History.
Jimmie Lee practiced law for several years after graduating from Harvard Law School with honors.

“Later, he joined Major League Baseball and became one of the most influential and highest-ranking Black executives for more than two decades while serving as the Executive Vice President of Baseball Operations and the Executive Vice President for Baseball Development. During his time at MLB, Jimmie Lee helped establish the first Urban Youth Baseball Academy in Compton, CA., and was instrumental in bringing the second academy to Houston, where it exists today in Sylvester Turner Park.

“Despite all that he accomplished in life, one of his greatest joys was serving as a mentor to active and retired professional athletes. Jimmie Lee Solomon was a man blessed with many talents, confidence, intelligence, and determination.

“I will always treasure his friendship and honor all that he accomplished in his 64 years. He had more deals to make and more barriers to shatter, but now he has finished the race.

“I extend my sincerest condolences to Jimmie Lee’s family, including his daughter, grandchild, brothers and sisters, and a host of friends in Florida and Houston, where he divided his time.”