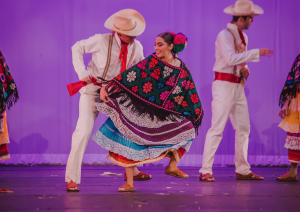 Mariachi Festival presents a night at the Wortham Theater featuring the University of Texas Rio Grande Valley (UTRGV) Ballet Folklórico on Saturday, August 6, 2022.  This organization is comprised of 50 students who are pursing degrees in a variety of disciplines. The Ballet Folklórico has traveled throughout the United States, Mexico, Canada, France and Italy to perform.

The UTRGV Ballet Folklórico has received national recognition through the American College Dance Association (ACDA). Their works have been showcased and selected to perform at the John F. Kennedy Center for the Performance Arts in Washington, D.C.

Miguel Angel Peña Caballero serves as the director of the UTRGV Ballet Folklórico.  He is a graduate from University of Texas – Pan American where he earned is Bachelor’s Degree and Master’s Degree in Electrical Engineering. He also has a Master’s Degree in Fine Arts in Dance from the University of Wisconsin – Milwaukee.  He has choreographed special performances throughout the United States for many artists, including: Paquita la del Barrio, Vikki Carr, and Mariachi Vargas de Tecalitlán.

“There is no other group like UTRGV Ballet Folklorico”, says Macaria Mendez, Chair of the Mariachi Festival Board of Directors. “We are excited to have them perform with Mariachi 7 Leguas and the University of Houston Mariachi Pumas.  This will be a spectacular evening at a first-class venue.”

For more information on the Mariachi Festival, go to www.HoustonMariachiFestival.com.