One of the children rescued from a Harris County apartment — where their dead sibling decomposed for nearly a year — required reconstructive facial surgery for an untreated injury that escalated to an infection, according to prosecutors.

The extent of the injury — caused when authorities say suspect Brian Coulter punched the child — was revealed Monday in court as the mother of the children, Gloria Williams, 35, went before a judge on three charges in the abuse case.

Coulter, Williams’ boyfriend, punched the child’s jaw in the weeks prior to the rescue when he visited the couple’s nearby apartment, prosecutors said. The apartment was separate from the third-floor unit at 3530 Green Crest where deputies on Oct. 24 discovered the three malnourished children living with the skeletal remains of their brother, 8-year-old Kendrick Lee.

In court, Judge Kelli Johnson asked whether Williams was aware of the abuse toward her children, and the prosecutor overseeing the case, Andrea Beall, replied that she did. The judge has agreed to seal documents with the identities of the surviving children.

“This case has shocked the conscience of our community, as well as the nation,” Beall said. “We need to make sure we find answers as to how a mother could allow this to happen to her children.”

Williams on Monday offered few words in the 178th District Court other than to say good morning to the judge. A hearing later this week will determine whether the mother’s combined bail of $900,000 will be lowered, raised, or stay the same.

Defense attorney Neal Davis III, appointed to the case that morning, said he was unsure if Williams had the financial support of her family to pay for her pre-trial release. 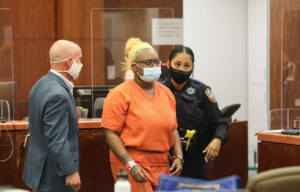 Defense attorney Neal Davis III, appointed to the case that morning, said he was unsure if Williams had the financial support of her family to pay for her pre-trial release.

Coulter and Williams were arrested Tuesday in the child’s death and the abuse of the others.

Authorities discovered Kendrick’s remains after his 15-year-old brother called police to CityParc II at West Oaks Apartments, telling them that their mother abandoned them in March. The siblings received food deliveries sent by their mother but were mostly forced to fend for themselves at times as their brother’s body continued to decompose.

According to court documents, two of the siblings witnessed Coulter punch and kick Kendrick until he stopped moving.

Coulter told police that he lost his temper.

The kids were forbidden from leaving the apartment by their abusers, the eldest child told authorities, and was possibly locked in different parts of their home. The conditions in the apartment were deplorable: the carpet was soiled and there were no furniture, bedding, or blankets. Roaches and flies crawled around the empty space.

The eldest brother was afraid to seek help because he had been abused and traumatized, officials said. He was relying on his mother to contact authorities after discovering his brother’s body in a bedroom last Thanksgiving, but she never did.

The mother said she did not report the abuse or death because her boyfriend told her not to, authorities said. She also feared that Child Protective Services would take her children away and she would go to jail. The state agency last week took custody of her children.

As authorities continue their investigation, they have also wondered why neighbors at the complex never called law enforcement. The Harris County Sheriff’s Office never received a report of foul odors or other suspicious activity from the unit, the agency has said.