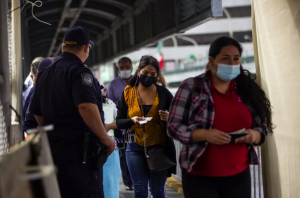 A federal judge in Louisiana on Friday blocked the Biden administration from lifting a public health order that immigration officers have used to quickly expel migrants at the southwest border, including asylum-seekers.

District Judge Robert R. Summerhays, a Trump appointee in Lafayette, ruled that the Biden administration violated administrative law when it announced in April that it planned to halt Title 42, a health order aimed at preventing the spread of communicable diseases in the country, on Monday.

The ruling will most likely spark a monthslong legal battle if President Joe Biden’s administration appeals it to a higher court.

Summerhays said in his ruling that the Biden administration violated administrative procedure laws and that lifting Title 42 would cause “irreparable harm” because the states would have to spend money on health care, law enforcement, education and other services for migrants.

“In sum, the Court finds that the Plaintiff States have established a substantial likelihood of success based on the CDC’s failure to comply with the rulemaking requirements of the [Administrative Procedure Act]. This finding is sufficient to satisfy the first requirement for injunctive relief,” Summerhays wrote in his ruling.

Department of Justice lawyers representing the administration have said in court documents that Title 42 was meant to be temporary and serve only as an emergency health order.

During a phone call with reporters last month, a Biden administration immigration official said the administration plans to comply with the judge’s order but remarked, “We really disagree with the basic premise.”

The administration had announced that it would stop expelling migrants under Title 42 starting May 23 and go back to detaining and deporting migrants who don’t qualify to enter and remain in the U.S. — a longer process that allows migrants to request asylum in the U.S.

That led more than 20 Republican-controlled states, led by Arizona, to sue the administration in Summerhays’ court on April 3, claiming that lifting the Title 42 order would create chaos at the U.S.-Mexico border and force the states to spend taxpayer money providing services like health care to migrants. Texas, which had filed a separate lawsuit, joined the Arizona-led lawsuit earlier this month.

“The Biden administration’s disastrous open border policies and its confusing and haphazard COVID-19 response have combined to create a humanitarian and public safety crisis on our southern border,” Texas argued in its lawsuit.

“I am glad for our state and our nation that it will remain in place,” he tweeted.

Tami Goodlette, the director of litigation at the Texas-based Refugee and Immigrant Center for Education and Legal Services, blasted the judge’s ruling — and Biden, for not immediately lifting Title 42 when he took office January 2020.

“Title 42 was never about public health, but rather is shrouded in racism, as doctors and public health experts have made clear that immigration is not a source of pandemic spread,” Goodlette said. “Now, President Biden must keep his promise to undo Trump’s anti-immigrant policies and take the only right, and moral path forward: fight this decision and use every administrative tool at his disposal to fight back against the right-wing extremists who lead the states that brought the suit, including Louisiana and Arizona.”

The lawyers for the states suing the Biden administration say the administration failed to post a public notice allowing the public to comment on the Centers for Disease Control and Prevention’s decision to lift Title 42, violating administrative procedural laws.

The Trump administration invoked Title 42 in March 2020, effectively closing the borders to migrants, including those seeking asylum, if they didn’t already have legal permission to enter. At the time, President Donald Trump said the CDC had to invoke the rarely used health order because “our nation’s top health care officials are concerned about the great public health consequences of mass, uncontrolled cross-border movement.”

Since then, immigration officials have used the order nearly 2 million times to expel migrants, many of whom have been removed multiple times. Since Title 42 removals began, the percentage of migrants apprehended more than once by the Border Patrol — called the recidivism rate — has increased from 7% to 27%.

According to The New York Times, Stephen Miller, a senior adviser to former President Donald Trump, had pushed the idea to invoke Title 42 at the U.S.-Mexico border as early as 2019, before COVID-19 emerged. When the pandemic hit, former Vice President Mike Pence ordered Robert Redfield, then the director of the CDC, to invoke Title 42 over the objections of CDC scientists who said there was no evidence that it would slow the virus’ spread in the U.S., according to the Associated Press.

Dr. Anthony Fauci, the nation’s top infectious disease expert, has said that immigrants are not driving up the number of COVID-19 cases.

As the pandemic has dragged on, Title 42 has been discussed less as a public health tool and more as an immigration policy.

Republicans and some Democrats say lifting Title 42 would lead to a new surge of migrants attempting to enter the country, overwhelming Border Patrol agents. They describe it as an effective deterrent to what some elected officials, including Gov. Greg Abbott, have described as an “invasion.”

The Arizona-led lawsuit describes Title 42 as “the only safety valve preventing this administration’s disastrous border policies from devolving into unmitigated chaos and catastrophe.”

Immigrant rights advocates say Title 42 has forced migrants into Mexican border cities, putting them in dangerous situations. New York-based Human Rights First said it has identified nearly 10,000 cases of kidnapping, torture, rape and other violent attacks on people expelled to Mexico under Title 42 as of March 15.