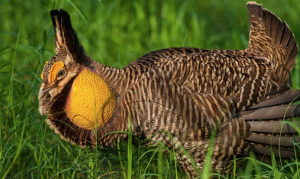 The Houston Zoo is breeding one of North America’s critically endangered inhabitants — the Attwater’s Prairie Chicken.

Known formally as the Tympanuchus cupido Attwater, the prairie chicken — technically a grouse, not a chicken — is unique to Texas and Louisiana gulf coastal areas and used to be a common game bird. The birds were once found on some six million acres of prairie along the Gulf Coast from Corpus Christi, Texas, north to the Bayou Teche area in Louisiana and inland some 75 miles. But acre by acre, as coastal prairies diminished as cities and towns emerged, the Attwater’s Prairie Chicken’s habitat rapidly disappeared, according to the U.S. Fish & Wildlife Service.

One of four zoos breeding and releasing the birds in partnership with the U.S. Fish & Wildlife Service, the Houston Zoo runs its breeding program on the grounds of NASA’s Johnson Space Center, on a plot of land that resembles their natural habitat of the coastal prairie.

The eggs are incubated, and the chicks are raised at the Zoo until they are large enough to pass a medical evaluation. Once they’re medically cleared, they are released back into the wild to join the existing population, a release reads. The program is in its 27th year.

During the 2021 breeding season, the Zoo successfully raised and released 68 prairie chickens, which is a significant number considering there are only an estimated 180 birds left in the wild. A century ago, there were about one million Attwater’s prairie chickens in the wild. By 1919, the grouse species had disappeared from Louisiana and by 1937 only about 8,700 birds remained in Texas, according to the U.S. Fish & Wildlife Service. The prairie chicken was listed as endangered in 1967 and in 1973 the Endangered Species Act provided additional protection.

“This is a Texas endemic subspecies of the greater prairie chicken, so this is a uniquely Texas bird,” said Chris Holmes, curator of birds and the head of Houston Zoo’s Attwater program. “Currently the survival of this species depends on these releases in partnership with the U.S. Fish & Wildlife Service.”