Third Ward business owners and residents are seeing an increase in the number of Houston police officers patrolling their area.

In October, Mayor Sylvester Turner and HPD Chief Art Acevedo announced that $4.1 million, given to the city as part of the CARES Act, will go toward increasing patrols in crime “hot spots”.

The money was specifically distributed to fund overtime hours to put 110 additional officers in six areas of the city, including Westside, South Gessner, North Belt, Southeast, South Central and Midwest.

Acevedo said since the increase in patrols, violent crime is trending down versus earlier in the year.

“It is having a positive impact, but the problem is sustainability,” Acevedo said. “How do we sustain it in the world where you still have the same number of officers you had 20 years ago in a city that has grown by 500,000?”

Kaffeine Coffee is a local coffee shop in Third Ward, which falls within the South Central part of the city. Owner Orgena Keener has been broken into seven times over the years since she’s been open.

“We’ve always seen cruisers, but they are actually stopping by, coming in-person and checking on us and that is something we have always wanted [them] to do, especially in the later hours of the evening,” Keener said.

Keener hosted an event called “Coffee with a Cop” so people in the community could form relationships with the officers.

“Just to physically come in and say to the business owner, ‘How’s your day? How’s everything going for you? We’re here for you,’ means a lot to us,” Keener said.

Across the street from her cafe, Bryce Redhead, the owner of Red’s Juice Joint and Smoothie Bar, said he has seen a decrease in the number of car break-ins. He attributes it to the visibility of Houston police in the area keeping criminals away.

“It would probably keep people away because they don’t want their car broken into while they’re getting something at the bar,” Redhead said.

However, crime has not stopped. On Tuesday night, the Family Dollar on Almeda and Southmore was robbed at gunpoint, according to HPD.

Simon Gentry and his wife narrowly missed the three suspects running down the sidewalk past their home.

“We had been at home for maybe three of four minutes and police were knocking on our door asking if our cameras were real or not,” Gentry said.

He was impressed by their timely response and said officers were canvassing the area within seven minutes of the robbery. The increased patrols funded by the CARES Act will end at the end of the year.
She said since her most recent break-in, in mid-October, officers have been stopping by to check-in. 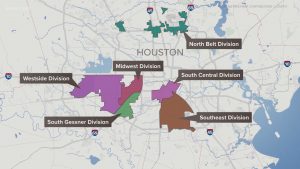