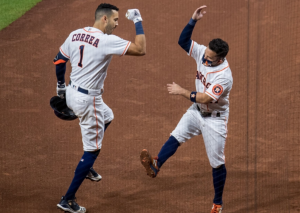 The Houston Astros advanced to their fourth straight AL Championship Series after beating the Oakland Athletics 11-6 on Thursday at Dodger Stadium in Los Angeles.

Carlos Correa drove in five runs for the Astros, who clinched the ALDS in four games and improved to 5-1 in the playoffs after struggling to a 29-31 record in the pandemic-shortened season.

“This is a special team that has been here before,” Astros designated hitter Michael Brantley said. “We have young guys that are leaning on the veterans and the veterans are taking care of them right now. No one guy has to carry this team when you have so many special players in the locker room like we do.”

The high-powered Astros managed to fight their way back to the ALCS despite the discovery of the team’s sign-stealing scheme and the widespread criticism that came with it. Houston will play either the New York Yankees or Tampa Bay Rays in the ALCS.

“It’s been a long, tough road, but we’re halfway there,” Astros manager Dusty Baker said. “I’m thankful and happy, but I still got some happiness left to give.”

Astros starter Zack Greinke gave up four runs on five hits across 4 2/3 innings against the A’s. He struck out four and walked one. Cristian Javier (1-0) earned the win after throwing 2 1/3 innings in relief.

Montas couldn’t hold off the Astros in the fourth inning, when Houston sent 10 batters to the plate and scored five runs. Altuve led off with a walk and scored on Brantley’s home run to cut the Athletics’ lead to 3-2. Alex Bregman and Kyle Tucker swatted back-to-back singles before scoring on Correa’s three-run shot, which gave the Astros a 5-3 lead.

Brantley added a solo homer in the fifth and Altuve had a two-run shot in the seventh that extended the Astros’ advantage to 11-4. The A’s scored two runs in the ninth but ultimately fell short.

“We just couldn’t do enough on the pitching end to hold them down,” A’s manager Bob Melvin said. “And then you start to press a little bit even though our guys had a good attitude every inning going into the ninth inning and got some guys on. We battled until the end as you would expect, just not enough.”

The Astros travel to San Diego for the AL Championship Series, which is set to begin Sunday.