The FDA commissioner will now make a final decision to authorize the vaccine.

A pandemic of the novel coronavirus has now infected more than 69.7 million people and killed over 1.5 million worldwide, according to real-time data compiled by the Center for Systems Science and Engineering at Johns Hopkins University.

He said the Pfizer vaccine will be approved, they are just working out the details and finalizing the fact sheet on allergy warnings.

“We weren’t counting on it in terms of getting to the projections that you and I have talked about having enough vaccine for the second quarter,” he said. “The Sanofi vaccine could be an important additional technology for later rounds of vaccination as one goes forward later in 2021.”

Azar also said the Food and Drug Administration will proceed with the emergency use authorization for the Pfizer-BioNTech vaccine.

He said 20 million Americans will be vaccinated this month, up to 50 million total in January and the U.S. believes “we could have 100 million vaccinations in the arm by the end of February.” 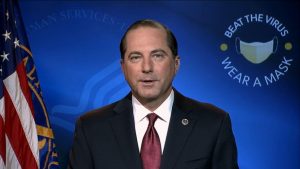