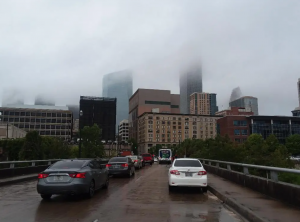 The commute home Tuesday could be a slow slog for many across the Houston area, which is bracing for heavy rain, strong winds, and potentially other types of severe weather.

A cold front is expected to pass through the region Tuesday afternoon, according to editor Eric Berger of Space City Weather. He said Monday morning that a line of storms figures to hit the city between 2-4 p.m. Tuesday, bringing 1-3 inches of rain on average along with gusty conditions and possibly thunder, lightning, hail, and tornados.

“There’s probably the potential for some street flooding,” Berger said. “It looks like this is going to come just before rush hour on Tuesday, so hopefully things will be improving by the time people start heading home (from work). It’s definitely going to be disruptive on area roadways Tuesday afternoon.”

A strengthening low-pressure system from the west is the culprit, according to Berger, who said temperatures are expected to be in the upper 60s with the potential for rainfall before the cold front arrives. The forecasted low for Tuesday night is 42 degrees, according to the National Weather Service’s Houston-Galveston office, which also is projecting wind gusts up to 40 mph during the latter part of the day and night.

Berger said winds are expected to shift late Tuesday and come from the north, with gusts potentially approaching 50 mph in coastal areas such as Brazoria and Galveston counties. He also said there could be isolated areas throughout the Houston region that see 4 inches or more of rain.

“We expect the severest weather, in terms of strong winds, lightning, thunder, that sort of thing, to be south of (Interstate 10),” Berger said.

Skies are expected to clear by Wednesday, but cooler temperatures will remain. The National Weather Service predicts highs in the 50s and lows in the upper 30s on both Wednesday and Thursday, with a high of 58 and a low of 47 projected for Friday.

“We’re going to see some of the coldest weather of the year so far,” Berger said. “For Houston, this is pretty chilly, even in January.”