Harvard University has announced it is removing Elise Stefanik, a Republican congresswoman of New York, from an advisory committee over her role in promoting baseless claims of widespread fraud in the presidential election.

Doug Elmendorf, the dean of Harvard Kennedy School, said Stefanik would no longer serve on the school’s Senior Advisory Committee, following a review by school leaders.

“Moreover, these assertions and statements do not reflect policy disagreements but bear on the foundations of the electoral process through which this country’s leaders are chosen.”

Elmendorf said he asked Stefanik, who graduated from Harvard in 2006, to step aside from the board. After she declined to do so, Elmendorf removed her from the post.

In characteristic fashion, Stefanik blamed Harvard’s decision to hold her accountable for spreading lies that culminated in a riot at the Capitol on cancel culture. 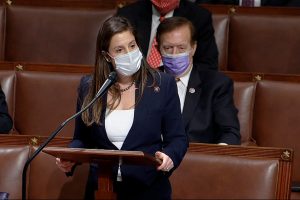