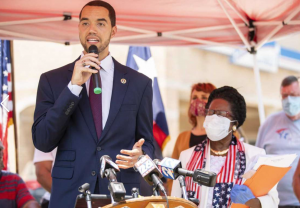 The court said Hollins had exceeded his authority by attempting to send applications to voters who had not requested them. Attorney General Ken Paxton sued the county in August, arguing that nothing in the Texas Election Code empowered county clerks to do so. His office said sending the applications would confuse voters to and lead some to vote by mail while ineligible, a felony.

“We conclude that the Election Code does not authorize the mailing proposed by the Harris County clerk,” the all-Republican court wrote in the unsigned opinion, later adding, “The authority vested in Texas counties — and county officials — is limited.”

The ruling comes six days after Gov. Greg Abbott declared counties could have just one mail ballot dropoff site, leaving Hollins with no choice but to close 11 locations he had spread out across the nearly 1,800-square-mile county. Both decisions force the rookie clerk of Texas’ largest county to scale back his ambitious, $27.2 million plan to make voting easier during the COVID-19 pandemic.

“It is dissappointing that the court has sided with political forces seeking to limit voter access this November,” Hollins said in a statement. “Placing limitations on non-partisan outreach that educates citizens about their Constitutional right to vote should not be acceptable in a democracy.”

“The Republican Texas Supreme Court, along with the governor and other Republicans, continues to micromanage the lives of local Texans,” he said in a statement.

“We must recognize the obvious and understand in an election year it’s very important to eliminate any and all confusion for voters,” Bettencourt said in a statement “Just because you have ‘free’ federal money doesn’t mean you should spend it on mailing millions of registered voters an absentee ballot form that nearly all of them can’t qualify for in the first place.”

On several occasions since the coronavirus arrived in Texas in March, Republican statewide leaders have curbed the power of elected officials in the state’s largest counties, who are almost exclusively Democrats.

Texas is one of a handful of states that requires an excuse for voting by mail. Residents must be at least 65, disabled, out of the county or incarcerated during the voting period.

Hollins already had sent applications to all elderly voters who are automatically eligible to vote by mail. He had ordered the printing of roughly 1.9 million applications to send to the rest of the county’s registered voters, confident the Supreme Court would rule in his favor. They sit on six pallets in the county’s election headquarters, now likely bound for the recycling bin.

Harris County already has received more than 210,000 requests for mail ballots, about double the number from 2016. The deadline to apply for a mail ballot is Oct. 23.