Following the distribution of the Pfizer vaccine last week, Moderna’s effort means the U.S. now has two vaccines in its arsenal to fight the coronavirus.

Distribution for Moderna’s Covid-19 vaccine began on Sunday, just two days after the Food and Drug Administration authorized it for emergency use.

Moderna’s vaccine distribution means the U.S. now has two vaccines in its arsenal to fight the pandemic that has infected more than 17.7 million Americans and claimed more than 317,000 lives.

McKesson, a healthcare supply chain management company, is shipping the vaccine around the country from its distribution centers in Olive Branch, Mississippi, and outside of Louisville, Kentucky. It began filling its first orders on Sunday, including the vaccine and ancillary supply kits needed to administer the shot. The company said their initial deliveries, at the U.S. government’s direction, should arrive by Monday.

“We are honored to be a partner with the U.S. government and other private-sector companies such as Moderna to support in the distribution of COVID-19 vaccines and the ancillary supply kits,” McKesson CEO Brian Tyler said in a statement.

The U.S. was the first country to greenlight the use of Moderna’s vaccine, which does not need to be stored at ultracold temperatures like the Pfizer-BioNTech vaccine.

McKesson has partnered with FedEx and UPS, who will help deliver the vaccine.

Nearly 6 million doses of the Moderna vaccine have been earmarked for distribution and are expected to be shipped to 3,285 locations across the country, according to officials with Operation Warp Speed, the federal organization with oversees vaccine development and distribution, which partially funded the Moderna work.

In a Friday statement, Modern said about 20 million doses of its vaccine will be delivered to the U.S. government by the end of this year

Moderna’s vaccine has been shown to be safe and highly effective at preventing symptomatic illness, according to documents released Tuesday. The data also suggest that the vaccine may reduce the virus’s spread by preventing infections, though more data are needed to fully understand that finding. 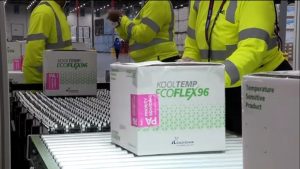