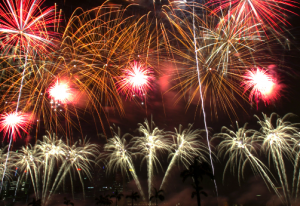 Firefighters across the Houston area were busy Monday evening and overnight as they worked to put out multiple blazes reportedly caused by Fourth of July fireworks.

The Harris Fire Marshal’s Office tweeted about the importance of properly disposing of fireworks, saying a passing neighbor saw smoke coming from a garage and was able to extinguish the fire before it could do any damage to a home.

Spring firefighters said it was a busy evening for them as they received many calls about grass fires in the community, as well as fireworks that hit the side of a chimney and sparked an attic fire in the Fox Hollow subdivision. A family was forced to leave their home because of that fire.

The homeowner, who did not want to go on camera, told KPRC 2‘s Zach Lashway it was her, her sister and their two cats inside the home when the fire broke out late Monday night. She said she had just gone to bed when she smelled smoke. When she got up to check, she saw a glow around her fireplace. According to the chief, the fire was in the attic and spread down the chimney framing quickly. Thankfully, everyone made it out safely.

Officials with the Klein Fire Department said units were on multiple scenes giving and receiving mutual aid on fires in the area. They had also been busy with multiple firework-related grass fires Monday evening and said there were “no signs of it slowing down for a while.”

Officials have stressed the importance of disposing of fireworks appropriately. Firefighters with HCFMO urged users to soak, drain, wrap and trash any used fireworks.