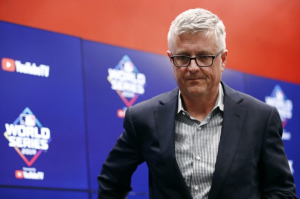 Jeff Luhnow sued the Houston Astros for breach of contract on Monday, alleging that Astros owner Jim Crane and Major League Baseball Commissioner Rob Manfred negotiated penalties for the sign-stealing scandal that enabled the team to paint Luhnow as “the scapegoat for the organization” and fire its general manager “in order to save more than $22 million in guaranteed salary.”

In January, after a two-month investigation into how the Astros violated baseball rules by improperly deploying technology to decode signs in the 2017 and 2018 seasons, Manfred suspended Luhnow and Astros manager A.J. Hinch for the 2020 season. Crane then fired Luhnow and Hinch.

Luhnow’s lawsuit uses quotation marks around the word “investigation” and calls it “a negotiated resolution” between Crane and Manfred “that enabled the team to keep its World Series championship, went to great lengths to publicly exonerate Crane, and scapegoated Luhnow for a sign-stealing scandal that he had no knowledge of and played no part in.”

Manfred later suspended Alex Cora, who was the Astros’ bench coach in 2017 and then became manager of the Boston Red Sox, for the 2018 season. The Detroit Tigers hired Hinch as their manager last week, and the Red Sox re-hired Cora.

Luhnow has not found work in baseball. His suit, filed at 7:13 a.m. PT in Harris County (Texas) district court, alleges the Astros breached their contract with him because none of the conditions that would be considered as just cause for his dismissal actually occurred.

In his report, Manfred said Luhnow denied knowing about the Astros’ sign-stealing schemes but suspended him because a general manager should be “aware of the activities of his staff and players.” Manfred also cited “evidence that indicates Luhnow had some knowledge” of the schemes.

In February, the Wall Street Journal reported that Manfred had told Luhnow the investigation had uncovered an email to him that referenced “our dark arts, sign-stealing department.” The email had been sent by Tom Koch-Weser, an Astros employee described in the suit as “the ringleader of the Astros’ sign-stealing schemes.”

“Some lower-level Astros employees were aware of the rules violations or participated in the violations at the direction of others,” Manfred wrote in his report. “I will defer to the Astros whether the conduct of these more junior employees merits discipline or other remedial action.”

Koch-Weser remained employed by the Astros, as director of advanced information. The suit alleges he falsely implicated Luhnow because “the Astros told Koch-Weser that he could keep his job so long as his actions were sanctioned by his supervisors, including Luhnow.” And, the suit further alleges, Manfred “let the ringleader keep his position in exchange for providing information that would implicate Luhnow.”

The suit claims that Manfred did not impose the Astros’ punishment independently but only did so after consultation with the Astros’ owner.

“The commissioner vetted potential penalties with Crane, and the two exchanged a series of proposals,” the suit reads. “Those negotiations proved beneficial to Crane and the Astros.

“The commissioner allowed the Astros to keep their 2017 World Series championship, imposed a $5 million fine (a fraction of the revenues Crane had reaped as part of the team’s recent success), and took away four draft picks. He also issued a blanket vindication of Crane, absolving him of any responsibility for failing to supervise his club.

“Moreover, Crane and the Astros were assured of fielding a contending team in 2020 — the team advanced to the American League Championship Series for the fourth straight year — because the commissioner did not suspend or penalize any of the players who were directly involved in the scandal.”

Manfred afforded players immunity in exchange for their testimony, citing in part a 2017 memo in which he had pledged to hold managers and general managers accountable for these types of violations. The $5-million fine is the maximum allowed under the league constitution.

Manfred also said he did not strip the Astros of their title — let alone award it to the defeated Dodgers — because of “a long tradition in baseball of not trying to change what happened,” and because he believed the league should “be transparent about what the investigation showed and let our fans make their own decision.”

In 2018, according to the suit, the Astros signed Luhnow to a contract that guaranteed him “more than $31 million,” unspecified performance bonuses, and unspecified profit-sharing interests scheduled to vest from 2021 to 2025. The suit claims that the alleged breach of contract cost Luhnow “more than $22 million in guaranteed compensation” and additional benefits.

Neither MLB nor the Astros immediately responded to requests for comment.